There are three parts to the Lisa Reihana: Emissaries exhibition, the centre of which is the panoramic and cinematic in Pursuit of Venus [infected] (2015–17), which reinvents and retells the stories of Pacific encounters with European explorers.

in Pursuit of Venus [infected] is a response to the neoclassical French wallpaper Les Sauvages de la Mer Pacifique (1804–5) by Joseph Dufour et Cie and Jean-Gabriel Charvet. Comprising 20 drops of paper embellished with over 1,000 woodblock prints, Les Sauvages graced dining and drawing rooms across Europe and North America, creating site-specific immersive environments. It references the journeys of early French explorers and the three Pacific voyages of British explorer Captain James Cook. The wallpaper panels existed as an entertaining, quasi-educational travelogue for the wealthy. The popular wallpaper was an Arcadian fantasy that embraced Rousseau’s notion of the ‘noble savage’.

Reihana saw Les Sauvages de la Mer Pacifique in 2005 and was deeply affected by it, saying, ‘This fascinating wallpaper is a concoction, a fabulation invented in someone else’s elsewhere, and a technical marvel of its time.’

In response, Reihana recasts and repopulates a vast five-channel digital video with real and invented narratives of encounter between the peoples of the Pacific and Europe. Harnessing technologies, she reclaims and reimagines the original wallpaper from a 21st-century Māori and Pacific perspective.

The title in Pursuit of Venus [infected] plays with the notion of the filmmaker’s ‘point of view’ or ‘POV’. The Venus that the artist references alludes to both the international search to measure space and time by documenting the 1769 transit of Venus and Europe’s romantic conception of the South Seas.

Reihana introduces the death of Cook in Hawai‘i as the dramatic moment of rupture within in Pursuit of Venus [infected]. Yet this drama and the other 80 vignettes play out within an endlessly looping visual world that scrolls from right to left every four minutes. The space is multi-dimensional and time is cyclical, referencing Pacific thinking about time and space that unifies nature, the mind, and reality in an eternal state of exchange. 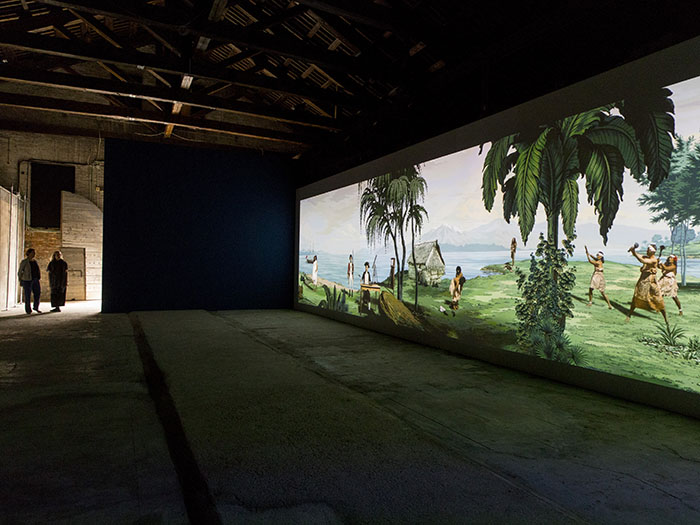 In the other two parts of Lisa Reihana: Emissaries, the artist plays with scale. Large digital ‘portraits’ of two key characters who appear in in Pursuit of Venus [infected] have been produced – Joseph Banks, the ambitious lead scientist and astronomer on Cook’s first voyage, and the Chief Mourner, a character who wore an elaborate costume and led traumatic rituals of mourning in the Pacific’s Society Islands. These portraits expand scale. Also included are small sculptural and photographic works that literally telescope in on certain moments and figures within the drama and contract the vast encounter experience into the miniature.

The Age of Enlightenment in 18th-century Europe was a time of reason and scientific endeavour, when the mapping of heavens, lands, and seas, and the ‘discovery’ of previously unknown peoples signified power and potential wealth. Lisa Reihana: Emissaries interrogates these ideas as she asks questions about power, postcolonialism, desire, and the intimate exchanges that take place between humans.

Lisa Reihana is of Ngāpuhi, Ngāti Hine, and Ngāi Tū descent. Reihana has helped develop time-based art in Aotearoa New Zealand. Influenced by indigenous filmmaking, she continues to experiment across photo, film, and digital media while exploring the possibilities of spatial and sculptural form, body adornment, and performance. Her practice is driven by a deep connection to the communities she works with, informing a collaborative, kanohi ki te kanohi (face to face) working method. For this project she collaborated with hundreds of people across Australasia and Europe.