The significance of the Dufour wallpaper

From the moment James Cook arrived back in England following his first voyage to the Pacific in 1771, a flurry of illustrated publications spread news and information about his travels. Over the next few decades interest in the Pacific continued unabated.

The panoramic French wallpaper Les Sauvages de la Mer Pacifique (1804–5) is an example of the intense interest in the Pacific aroused by Cook’s voyages.

View a large version of the painting [JPG; 1.35Mb]

Les Sauvages de la Mer Pacifique is a rare, spectacular, large-scale panoramic wallpaper printed in colour from woodblocks with colour finishing by hand. It was printed by the innovative wallpaper manufacturer Joseph Dufour, and designed by textile and wallpaper designer Jean-Gabriel Charvet.

A panoramic wallpaper consists of a series of drops that can either be hung individually or joined together to form a panoramic scene in a domestic environment. The wallpaper was popular and sold throughout Europe and in North America. It was bought by wealthy individuals to adorn their dining rooms and drawing rooms. The complete sequence of Les Sauvages de la Mer Pacifique consists of 20 drops, each of which were numbered and described in an accompanying brochure written by Dufour.

The wallpaper offered a kind of ‘armchair tourism’, intended to transport viewers to another time and place. The scenes depicted were inspired by Cook’s voyages to the Pacific. Te Papa’s example depicts 23 different indigenous groups from throughout the Pacific, from Alaska to New Zealand. All are set in the lush environment of Tahiti, described by Louis Antoine de Bougainville following the French visit in 1768 as ‘the Garden of Eden … everywhere we found hospitality, ease, innocent joy, and every appearance of happiness’. This reinforced the myth of the noble savage and the idea of the Pacific as paradise. In the panels, features are generalised, and there is reduced attention paid to traditional practices of body adornment, piercing, and tattoos. In spite of this sanitisation, Les Sauvages de la Mer Pacifique does include a moment of rupture to this narrative: the death of Captain Cook, reduced in scale and a background detail in one panel. 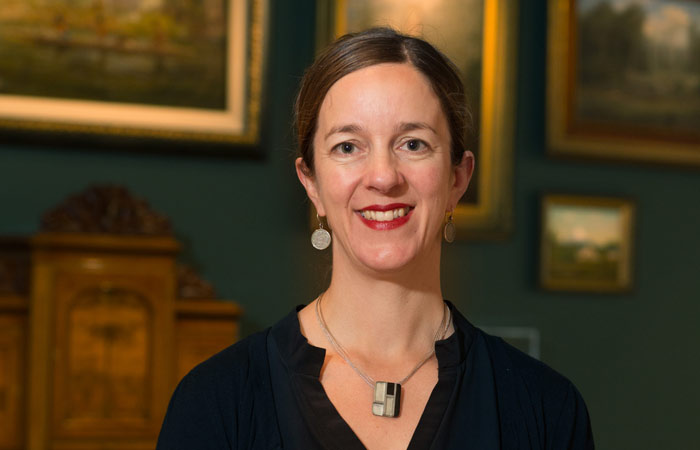 Since the 1980s there has been renewed interest in Les Sauvages de la Mer Pacifique in Australasia and the Pacific. It can be seen as a window onto the past, reflecting the beliefs and preoccupations of the time. It can also offer a means to reflect on the European perspectives on previously colonised cultures – which have shifted profoundly over recent decades.

The wallpaper panels have become a focus of attention for indigenous peoples too – who, in revisiting the representations of their forebears, are challenging the stereotypes evident within it. For all of these reasons this historical wallpaper remains relevant to contemporary audiences here in New Zealand and a prized taonga in Te Papa’s collections.