During the 19th century, many Western museums and universities collected human remains and Auckland’s Tāmaki Paenga Hira was no exception, with this type of collection happening from the mid-1800s and continuing up until the 1990s.

Some human remains were deliberately exhumed from wāhi tapu wāhi tapuburial groundMāori | Noun, including at the instructions of Director Thomas Cheeseman, to be added to the museum's collection or for exchange with other museums.

Other human remains were uncovered by accident; either from natural forces such as beach erosion or human activity such as building development or quarrying.

The museum began to return these remains during the 1980s by request and has run a proactive repatriation programme since the early 2000s, resulting in the repatriation of over 100 tūpuna

In 2003, under the leadership of the museum’s iwi

To complete this new programme of work, the museum hired a researcher, Cressida Fforde, and Rangiiria Hedley to liaise with iwi. Rangiria Hedley and looked at completing the repatriations within a few years, however after her passing in 2011 that work came to a halt.

It was restarted in 2016 with the recruitment of a Kōtuitui Rangahau Repatriation Coordinator and Researcher Coralie O’Hara and Tumu Here Iwi Relationships Manager, Robert (Bobby) Newson.

Coralie conducts provenance research into the tūpuna held at the museum, writes reports and updates the museum’s records. Bobby works in concert with Coralie by establishing relationships with iwi and once Coralie’s provenance research is complete, he takes all of this information to them with a view to working alongside the iwi to organise the return of their ancestors.

In many ways, Bobby provides guidance in what can be an incredibly emotional experience for the community’s members. 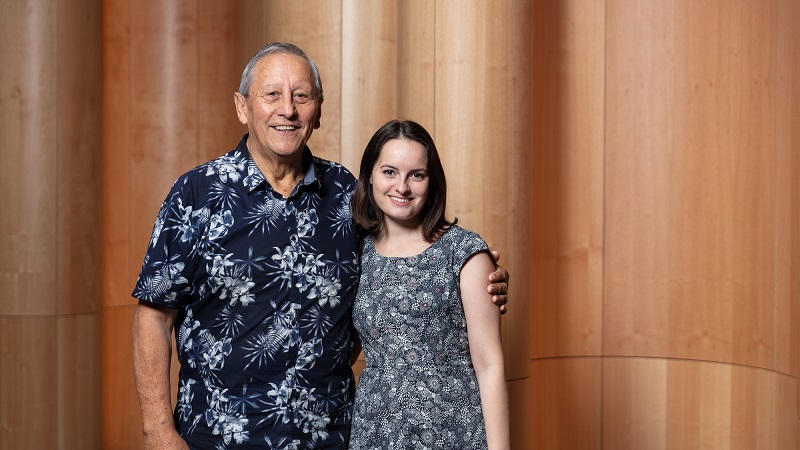 “Since we started working as a team we have done four repatriations and each one is incredibly unique. When I arrived, Tāmaki Paenga Hira already had existing relationships with many of the iwi, though often the elders or people involved in this work had passed away, so in many cases, it can take a long time to get to a point of having open discussions.

“How we work is that we give these communities our research and then allow a period of time so they have time to process that information before we look into the return of these tūpuna.

“Typically people are pleased to hear that we are in the process of returning these kōiwi kōiwiancestral remainsMāori | Noun, though sometimes they may not be ready to receive them, so it is vital to be sensitive to their journey,” says Bobby Newson.

At Tāmaki Paenga Hira, kōiwi are held in a discrete, peaceful room that is only accessed by the repatriation team, and although there is no plumbing to the room the team ensure that wai whakanoa wai whakanoaremove tapu (the condition of sacredness) with water Māori | Noun is always at hand.

“There are a number of considerations about the tikanga

tikangaprotocolsMāori | Noun around the transfer of these tūpuna from the museum back to their source communities. Tūpuna have to leave via the front entrance. There can’t be food around when this happens and we are conscious of the sensitivity of this kaupapa

kaupapaprocessMāori and that members of the public and staff may not be comfortable around human remains.

“Because of the design of the building, there would be no way to avoid people or the café if we left during opening hours. It is therefore our tikanga that tūpuna depart the museum either before opening or after closing. We put out a notice to all staff beforehand so that we can create a respectful space for this ceremony,” says Coralie.

During the past few years, Bobby and Coralie have conducted four repatriations with iwi in the North Island. Although each repatriation is different, before the tūpuna depart the museum always there is a karakia poroporoaki, a farewell blessing, with a small number of staff and sometimes iwi representatives.

In most cases, the repatriation team has travelled with the tūpuna to the urupā urupāburial groundMāori | Noun. Those who can will observe noho puku on this journey – avoiding eating until after the tūpuna have been reburied.

In all instances, the re-burial of kōiwi is guided by local tikanga, so the ritual and practices are always different at each repatriation.

As Bobby says, “Each and every detail is guided by the iwi or hapū

hapūsub-tribeMāori | Noun, so it is unique each time. In one case the iwi created a woven kete

ketebasketMāori | Noun for their tūpuna, though others may use the boxes that we provide. Our role is to give them tailored advice and act as a facilitator and supporter of the return of their tūpuna.”