There are many legends about the star cluster Matariki. One of the most popular is that the star Matariki is the whaea (mother), surrounded by her six daughters, Tupu-ā-nuku, Tupu-ā-rangi, Waipunarangi, Waitī and Waitā, and Ururangi.

During this visit, each of the stars help Papatūānuku to prepare for the year to come, using their unique qualities or gifts to bring mauri to her different environments. Whilst spending time with their kuia

kuiaelderMāori | Noun, they also learn new skills and gain new knowledge from her, which they guard and pass on to others. 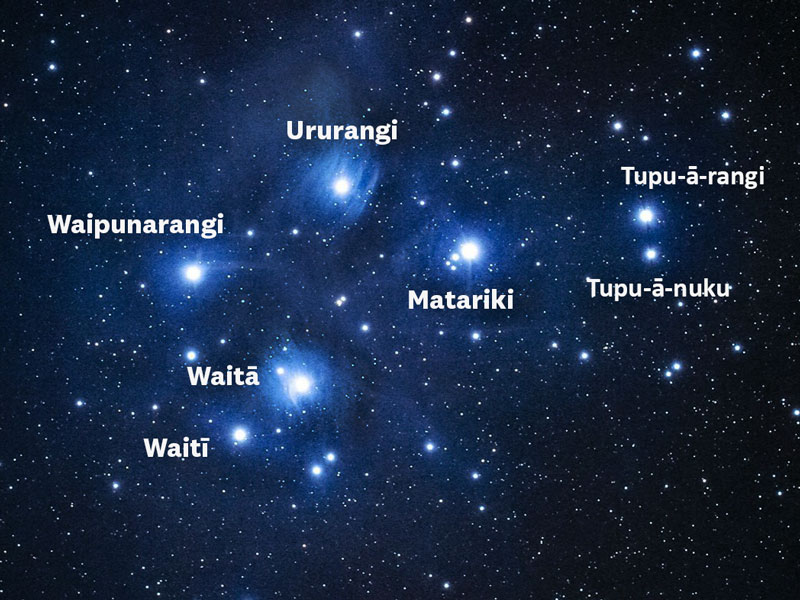 Tupu-ā-nuku is the eldest of Matariki’s daughters. She spends her time with Papatūānuku tending to plants. She pays special attention to making sure they have everything they need to grow big and strong so they can pruduce kai

When we see her shining we are reminded that we all have our own special time and place, and to spend time growing our pūkenga as well as that of our friends. 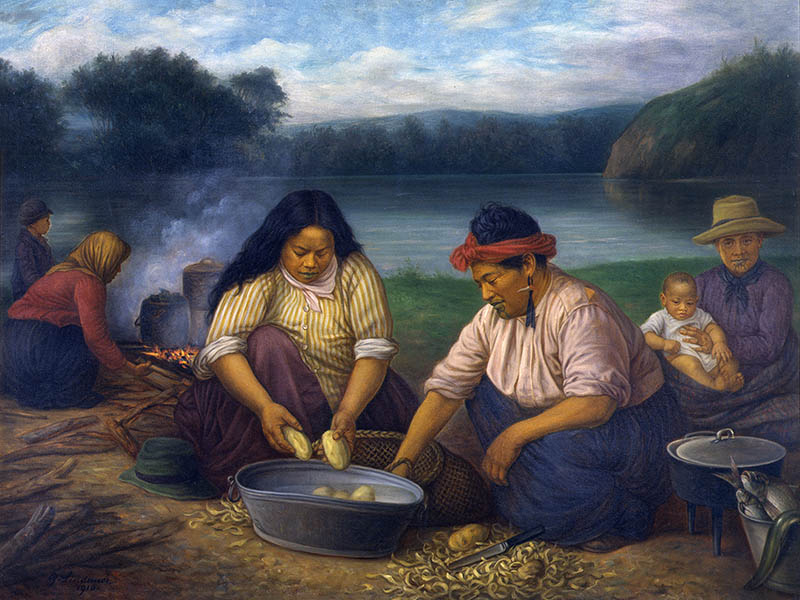 Tupu-ā-rangi loves to sing. Papatūānuku takes her to sing for te wao nui, for te wao nuite wao nui the great forests, and all the children of Tānemahuta. Her beautiful voice revives the forest and all the other creatures, including the manu

waiatasongMāori | Noun, which fills the world with joy.

Tupu-ā-rangi learns these songs and holds them close to her heart. We learn from her the importance of sharing our gifts with others, and appreciating those shared with us. 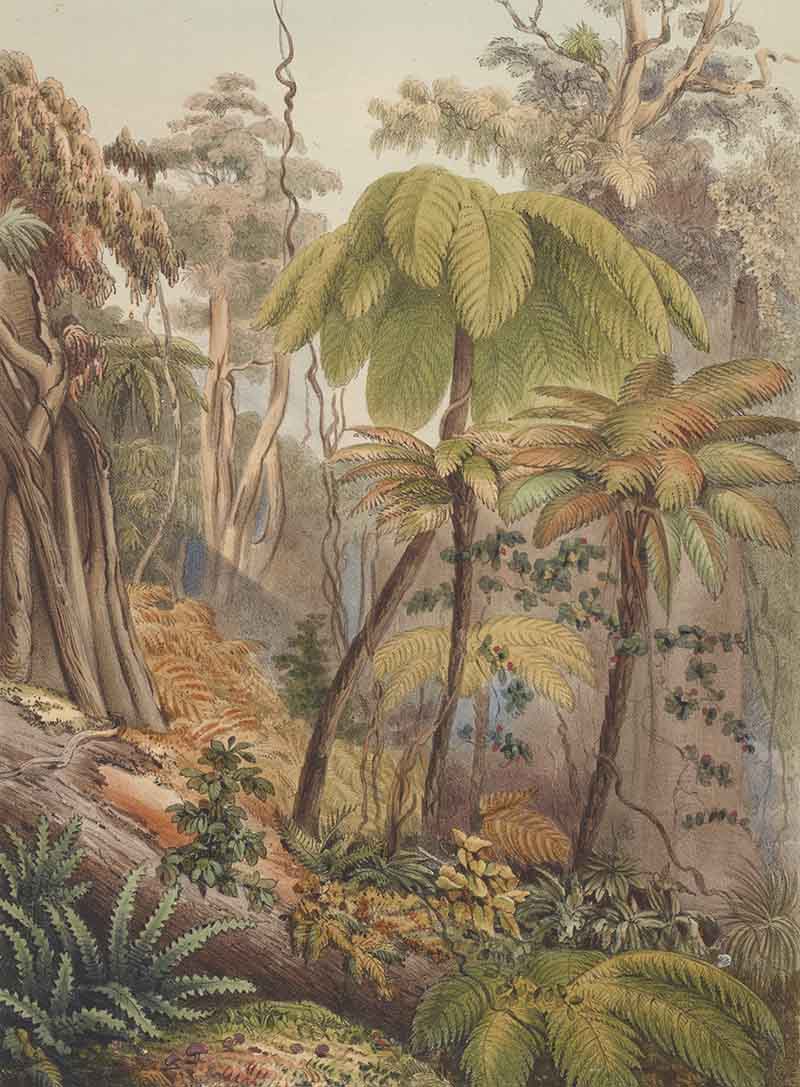 Waipunarangi accompanies her grandmother to the waters – the oceans, lakes and rivers – where she prepares the children of Tangaroa

Ranginuithe sky fatherMāori | Noun collects together to provide drinking water for the people, animals and plants.

She also watches how the water is evaporated by the heat of Tama-nui-te-rāTama-nui-te-rā the sun into the clouds that cloak Ranginui, so that may rain once again.

Waipunarangi knows that if you give to others, all that kindness will come right back to you, and it is this lesson that she shares with us.

Waitī and Waitā are Matariki’s twins. Papatūānuku knew that they would be able to care for the smallest and fastest of creatures – because they too know about being a team.

When insects work together, they can they can do amazing things. Ngā pīNgā pī beesNgā pī ees, for example, pollinate all the flowers so that the plants grow, and we have air to breathe. Ngā pōpokorikiNgā pōpokoriki ants build huge, complicated tunnel cities underneath the ground, and carry many times their body weight.

When we see these two stars in the sky, we are encouraged to join in and support each other. 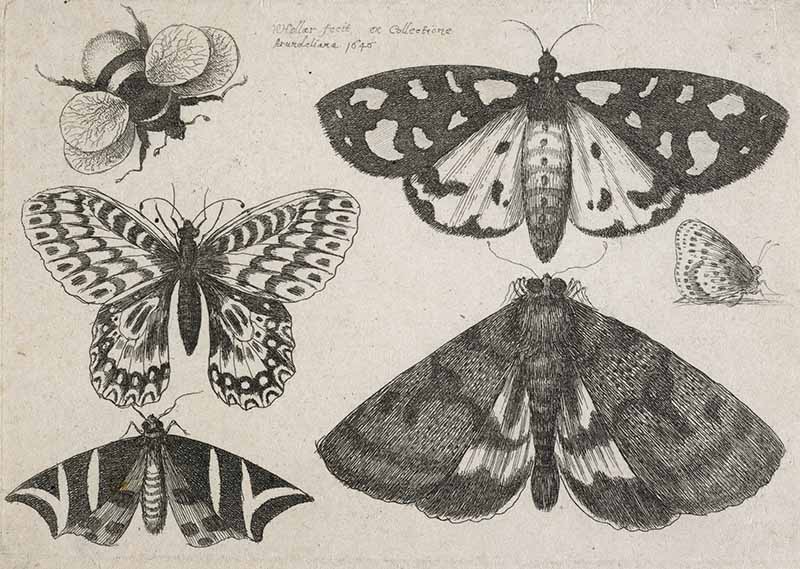 Ururangi enjoys racing all of her sisters to get to her kuia first. She claims the best spot on her grandmother’s lap and wraps herself in her arms, settling in for her favourite stories. Her tenacity and excitement, along with the awhiawhi hug and her aroha

arohaloveMāori | Noun, helps Papa to get into the right mood after the cold and darkness of takuruatakurua winter, to prepare with her older mokopunamokopuna grandchildren.

Ururangi reminds us that a good attitude is always key to success.

But what about Matariki you may ask? Well, she's doing what all good mothers (and other caregivers) do – watching over and helping out  her tamariki

tamarikichildrenMāori | Noun. With her support, encouragement, and supervision, they will be able to do their very best.