A new species of ocean sunfish has been discovered and formally described by an international team of researchers from the Museum of New Zealand Te Papa Tongarewa, the University of Otago, Hiroshima University and the University of Tokyo, and led by a Murdoch University student.

Marianne Nyegaard, from Murdoch’s School of Veterinary and Life Sciences, found the new species while researching the population genetics of ocean sunfish in the Indo-Pacific region as part of her PhD.

Iconic ocean sunfishes are the heaviest and most distinctive of all bony fishes, and some species weigh in excess of two tonnes and grow to three metres in length. The newly discovered species is thought to approach a similar size.

The often challenging journey to confirm the discovery was a four year labour of love for the lead researcher Ms Nyegaard, who began investigating after noticing genetic differences in sunfish samples from the Australian and New Zealand long-line fishery.

“A Japanese research group first found genetic evidence of an unknown sunfish species in Australian waters 10 years ago, but the fish kept eluding the scientific community because we didn't know what it looked like,” explained Ms Nyegaard, who is currently writing up her PhD research.

“Finding these fish and storing specimens for studies is a logistical nightmare for museums due to their elusive nature and enormous size, so sunfish research is difficult at the best of times. Early on, when I was asked if I would be bringing my own crane to receive a specimen, I knew I was in for a challenging – but awesome – adventure.”

The Fishes Collection at Te Papa provided the exception, having designed storage systems that allow it to preserve and store multiple examples of largish specimens. For that reason, a lot of the research was focused on this material.

Over a three-year period Marianne and colleagues collected data from 27 specimens of the new species, at times travelling thousands of miles or relying on the kindness of strangers to take samples of sunfish that had stranded on remote beaches.

“The new species managed to evade discovery for nearly three centuries by ‘hiding’ in a messy history of sunfish taxonomy, partially because they are so difficult to preserve and study, even for natural history museums,” added Ms Nyegaard.

“Because of this, we named it Mola tecta, from the Latin tectus, meaning ‘disguised’ or ‘hidden’.”

“This new species is the first addition to the Mola genus in 130 years. As part of the process, we had to go through to confirm its new species status included consulting publications from as far back as the 1500s, some of which also included descriptions of mermen and fantastical sea monsters. The advent of web sites that specialise in digitising a lot of these very old, rare and often extremely fragile manuscripts has greatly assisted in the search for the oldest names. We discovered that many names were used to describe the bizarre juveniles which cannot be tied back to adults of any of the species.”

“We retraced the steps of early naturalists and taxonomists to understand how such a large fish could have evaded discovery all this time. Overall we felt science had been repeatedly tricked by this cheeky species, which is why we named it the Hoodwinker.”

Similar to its two sister species, the Ocean sunfish, and the Short sunfish, the new species has the same characteristic truncated appearance of only being half a fish, but clear differences between the species become obvious with growth. This research has also found that all three species are found in New Zealand waters, but that the traditional Ocean sunfish is very rare, with only one example from Cape Palliser. The Hoodwinker sunfish, on the other hand, has been found to be quite common.

Mola tecta remains sleek and slender even in larger sizes, differing from the other species by not developing a protruding snout, or huge lumps and bumps.

Mola tecta appears to prefer cold water, and has so far been found around New Zealand, along the south-east coast of Australia, off South Africa and southern Chile. There is evidence that the fish may occasionally wander into the northern hemisphere.

As part of the study, a one metre long, 52 kg specimen was prepared by the Museum of New Zealand Te Papa Tongarewa in Wellington. This is now the official name-bearer (known as the holotype) of Mola tecta.

The paper on the new sunfish species has been published in the Zoological Journal of the Linnean Society. 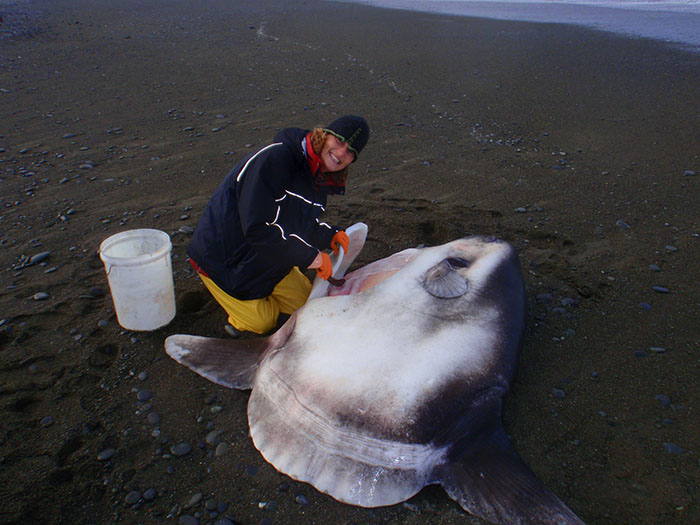