More than 1.3 million visitors of all ages have explored Te Papa’s Gallipoli: The scale of our war in the two years since it opened. 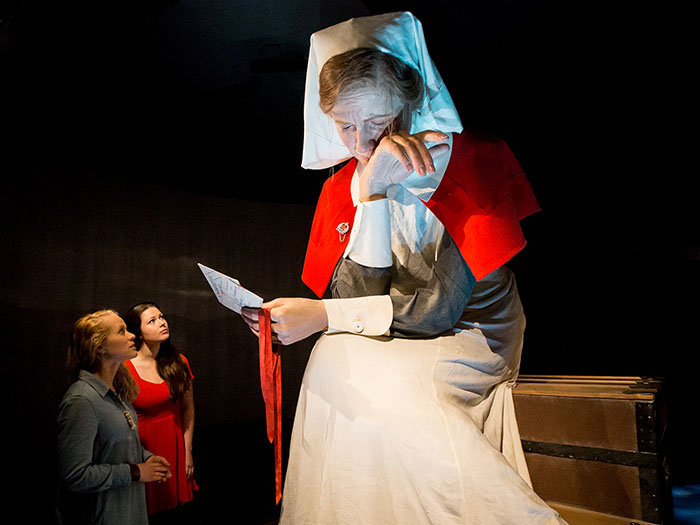 The ground-breaking exhibition tells the stories of seven ordinary New Zealanders and one Australian who found themselves in extraordinary circumstances during World War I. The centrepiece for each story is a monumental figure 2.4 times human size, created by Weta Workshop.

Queues into the exhibition have been a regular occurrence since it opened in April 2015. New Zealanders make up 58% of attendees, while 9% of visitors are returning for a second visit.

The exhibition has particularly proven popular with millennials, with 37% of visitors being aged between 15 and 34.

History curator Kirstie Ross says World War I exhibitions might traditionally appeal to older generations, so it’s gratifying that hundreds of thousands of younger people taking the time to see Gallipoli: The scale of our war.

“Feedback we get from younger visitors is that it has made the Gallipoli campaign and World War I more real to them. They can see glimpses of themselves, or their relatives or friends, in these figures and stories.

“We wanted to create an enduring exhibition that would commemorate the Anzacs and ensure their legacy and the memory of Gallipoli would live on.”

Looking for new ways to tell the story of the Gallipoli campaign, Ms Ross says Te Papa used state-of-the-art technology, as well as some more tried and true museum techniques to bring the story to life.

“We worked closely with Weta to create an exhibition that would appeal to all ages. As well as the eight monumental figures, the exhibition also uses audio visual storytelling, 3D projection mapping, dioramas and miniatures to tell the story of the campaign. Some of the newest technology includes 3D images which were taken to help create the models of our eight figures. These different mediums make this exhibition rich and multi-faceted.”

Twenty-one-year-old visitor to Gallipoli: The scale of our war, Chloe, says she was overwhelmed by the exhibition.

“I’m still trying to comprehend what just went on in there. Everything became real; war’s something not very tangible to the mind of a 21-year-old, so it just became real.”

Ms Ross says the exhibition is also having an impact on older visitors. Those aged 65 and over make up 17% of visitors to the exhibition.

“The older generation still bear the impact of this war with the surviving children of soldiers being particularly touched by the way the exhibition tells this story in a fresh way.”

“We must have been selfish, silly young females,” says Peggy, now 93. “I feel guilty about it, but we just never talked about the war.”

But now with sister Billie (90) she has been able to learn a little more about her dad’s wartime experiences, with a trip to Gallipoli: The scale of our war at Te Papa.

Billie came from her home in Christchurch and Peggy from hers in Hastings to see the exhibition. Like many who come to Gallipoli, it was a family affair, with three generations sharing the experience together. Each brings their own perspective on what dad, granddad or great granddad must have been through.

Frederick Ernest Walker fought at Gallipoli as part of the Auckland Mounted Rifles, returning to New Zealand a changed man.

Suffering from shell shock, his health broke down. The family moved often as he struggled to support them on a war pension.

For his three daughters, born after his return, the war cast a long shadow.

“Dad had nightmares his whole life,” Billie recalls. “You’d hear him scream in the night, but we never knew why.”

Visiting the exhibition was a moving experience for the two sisters, and a time to reflect on the impact that their father’s war experiences had on their own lives.

“Dad was a very gentle guy,” remembers Billie. “But I remember during World War Two, I was complaining about there not being enough boys at the dances.”

“Dad got really angry, he said, ‘you’ve got no idea what they’re going through over there,’. It brought us up with a short turn, and it was one of the only times he talked about it.”

Those who hadn’t experienced the horrors of war could be quick to judge those who had suffered through it.

The sisters recall men in the neighbourhood who accused their father of “swinging the lead” – avoiding work on his war pension. Even today their anger is palpable as they recall the ignorance of those who judged their father unfairly.

“No one knew the life he had,” says Billie.

Billie and Peggy spent an hour and a half in the exhibition, learning about their father’s experience on the peninsula – from the way the trenches were dug within earshot of the enemy, to the hardships of daily life with the heat, the food and the flies.

The emotional impact really struck them when they saw the giant figure of nurse Lottie Le Gallais, holding the letter marked “Killed – Return to Sender.”

And what would their father have made of the exhibition, and the interest shown in Gallipoli by the more than 1.25 million people who have seen it to date?

“I think he would be grateful that the story had been told,” says Billie, “because he bottled it up and maybe if he hadn’t, he wouldn’t have been such a broken man.”

Peggy agrees. “I think he would have appreciated that you can talk about it now.”

Certainly this special trip to Te Papa will be one that the family are talking about for many years to come.

Gallipoli: The scale of our war is open daily from 10am till 6pm at Te Papa on level 2. Free entry.