Te Papa celebrates 20 years of “our place” on 14 February

After a dawn ceremony and huge anticipation, at midday on February 14, 1998, yachtsman Sir Peter Blake led two children through the doors of Te Papa Tongarewa The Museum of New Zealand, on Wellington’s waterfront.

Thousands gathered to be the first to visit the high profile new building. The radical concept for Te Papa was that it would be a bicultural museum, and incorporate both the national museum and national art collection. 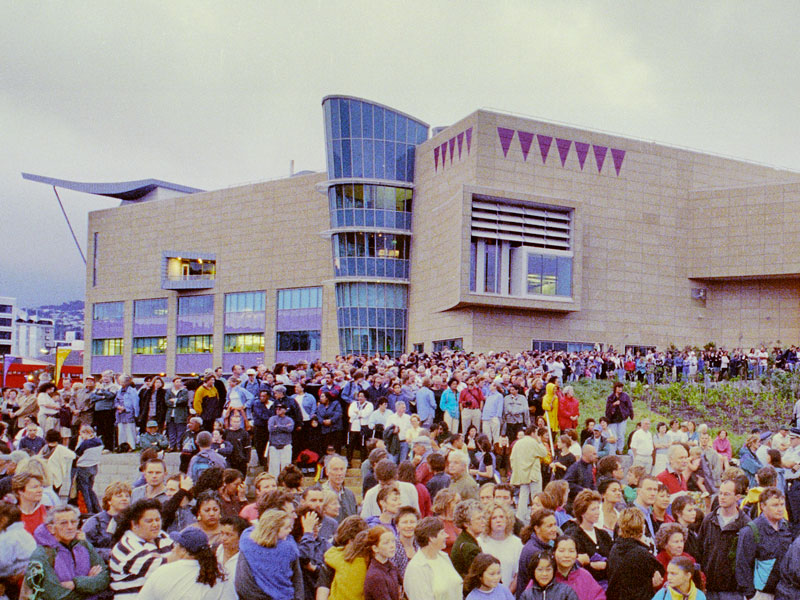 As the biggest ever investment in New Zealand culture and heritage, and one of that decade’s biggest museum projects globally, Te Papa was the subject of extraordinary scrutiny.

What would this new type of museum be like, and would it achieve the vision of its two leaders, Chief Executive Cherylll Sotheran and Kaihautū Cliff Whiting?

From the 35,000 visitors who saw Te Papa on its opening day, to the more than two million who visited in its first year, Te Papa was embraced by New Zealanders. While controversies raged – including protests about the Tania Kovats “Virgin in a condom” artwork – the public continued to visit Te Papa in their thousands.

By 14 February 2018, Te Papa will have had almost 30 million visitors, discovered more than 400 new species, hosted more than 3,000 pōwhiri, and rocked visitors with more than 1.3 million shakes of its famous earthquake house.

Te Papa is consistently rated as one of the world’s best museums, and a top attraction in New Zealand, and its approach to storytelling and biculturalism remains a model for museums around the world.

Chief Executive Geraint Martin says the reason for Te Papa’s success is that it offers a new kind of museum experience.

“Our aim is that every New Zealander can see themselves reflected at Te Papa, and that international visitors can understand the richness and diversity of Aotearoa.”

He says the museum has always faced criticism, and he hopes it always will.

“Given the significance of the stories we tell, it’s very healthy that they are the basis for debate and disagreement.”

“We are here to cherish and treasure our culture, but also to challenge the old ways of doing things, to engage and surprise, and sometimes to provoke. Te Papa needs to be a safe place for challenging national questions.”

Major changes are ahead for Te Papa in the coming years, Martin says.

“Next month we open a new art gallery in Te Papa, Toi Art, the biggest change to the museum since opening.”

The $8.4 million space offers a vast newly-created gallery able to hold works that have never been shown at Te Papa before, and the opening on March 17 will reveal major commissions by contemporary New Zealand artists. Following the opening of Toi Art, the next space to change will be the nature and environment area.

“From Easter 2018 we will begin work on a new nature and environment section which will open in 2019,” Martin says.

“Te Papa will always be changing and offering new experiences, inside the building and beyond our walls.”

Te Papa’s Kaihautū (Māori co-leader) Dr Arapata Hakiwai has been with the museum since its earliest days. He says the strength of Te Papa has always been in its ties to the community.

“Te Papa is different from other museums, and we celebrate that difference,” Hakiwai says. “We are a place where everyone can feel at home, and everyone can find a place to stand.”

“As a bicultural museum we have always been reliant on our relationships with iwi, hapū and whānau, and as we mark our twentieth anniversary we want to recognise and acknowledge that ongoing support: E ngā mana whenua, E ngā iwi o te motu tena koutou mo o koutou tautoko mai. No mātou te honore kia mahi ngātahi ai.”

“Te Papa is about learning, about artistic excellence, about seeing ourselves in all the complexities of living together in Aotearoa, but one word that comes up whenever you mention Te Papa is ‘fun’.”

“That sense of fun, of joy, of connection and surprise that we see in our visitors, young and old, is the wairua, the energy that powers this place, Our Place,” Dr Hakiwai says.

Te Papa will mark its birthday with a special evening concert, and activities in the museum including special free tours and film screenings. The museum will be open until 9pm on Wednesday 14 February.

A radio and podcast series, “Ours”, highlighting twenty objects from Te Papa’s collections, will air weekly on RNZ’s Jesse Mulligan show from 13 February. In each episode a New Zealander, from the Prime Minister to a nine-year-old squid fan, share their passion for a favourite Te Papa object.

Te Papa by the numbers

Gallipoli: The scale of our war is the most popular exhibition in New Zealand’s history, with 1,813,916 visits from its opening on 18 April 2015 to the end of January 2018. It cost $8 million to create, and was created by Te Papa working closely with Weta Workshop. It is free to visit.

The day started with a dawn ceremony after 6am, which included a Waka launch from Chaffers Beach or Nga Tai a Tangaroa meeting the large ocean-going waka Te Aurere Iti as it arrived at Te Papa carrying iwi representatives from New Zealand and Hawaii. Te Aurere Iti was accompanied by several smaller waka.  Upon arriving on shore, the warriors burst into haka and were led from the shoreline to Te Ara a Tane (the walkway up to the marae).

The theme of the opening was “Te Papa’s House Warming party”, and the party started from 10am with the museum closing at midnight.  The opening day celebrations featured music, dance and multi-cultural performance both inside and outside the museum.  Visitors were entertained as they queued, waiting to go inside the museum.

The official door opening was at midday.  The then Prime Minister, Jenny Shipley, arrived via helicopter and was to open the museum.  However, she decided to invite America’s Cup yachting hero, Sir Peter Blake, to do the honours.  Sir Peter Blake told the crowd that the job for declaring the museum open was a job for the people who represented the future of New Zealand – young people.  So the museum was officially declared open by five-year-old Tama Whiting and eight-year-old Grace Sweeney and with Sir Peter Blake, they were the first to enter Te Papa.

Entertainment continued throughout the day as visitors poured through the museum.  The highlights of the day were televised during a TV 1 television special, which included the performance of the New Zealand Symphony Orchestra playing a piece called “Te Papa”, composed especially for the opening by Gareth Farr.