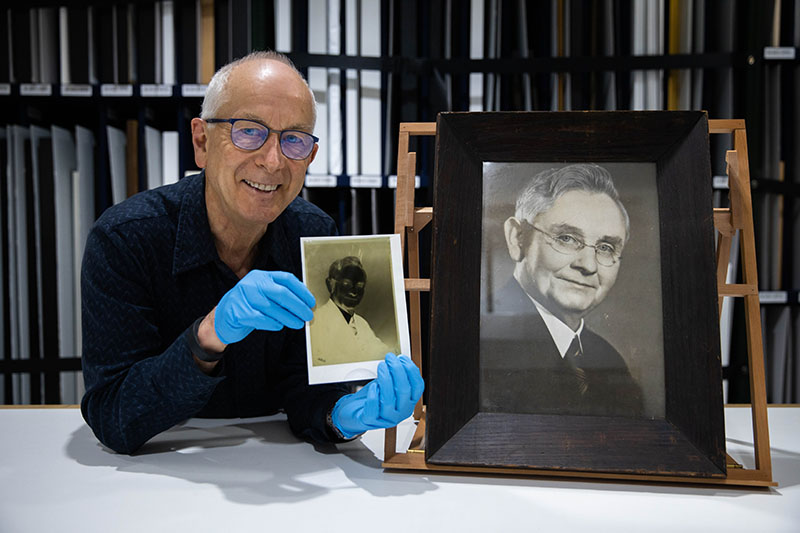 It is one of New Zealand’s most famous photographs, a black and white image of the gently smiling Michael Joseph Savage.

The iconic portrait of the country’s first Labour Prime Minister hung in thousands of homes in the 1930s and 40s, and is visible today in the office of Prime Minister Jacinda Ardern.

Until now, historians have never known if the original negative still existed. But this month, a Te Papa curator discovered the original of the famous photo.

It was discovered among the archive of Spencer Digby Studio. The Spencer Digby – Ronald D. Woolf Collection was gifted to the museum by the Woolf family of Wellington. It is held by the museum and comprises tens of thousands of negatives of images taken by the studio from the 1930s – 1960s.

A curator’s hunch led to the discovery.

Te Papa curator of photography Athol McCredie said he had suspected the The Spencer Digby – Ronald D. Woolf Collection might hold the original of the iconic image, but it was only when he began actively researching the archive this year that he put the clues together.

After poring through copies of the studio’s register book, he found an entry reading simply “Savage” which led to the discovery of the negative, tucked in a tightly-packed drawer.

Athol McCredie said the find was an exciting one for the museum.

“Michael Joseph Savage was beloved by New Zealanders, and this portrait was in homes, in kitchens, on mantelpieces – almost like a religious icon or a family photo.”

“We’ve seen the image reproduced so many times, but never the negative – this is the origin of all those image, the original all those prints came from,” Mr McCredie said.

Savage continues as an icon of the left today. Prime Minister Jacinda Ardern has the portrait in her office and it was prominent in the background of her address to the nation announcing the covid-19 alert level system.

Massey University Political communications expert Claire Robinson noted at the time that the portrait appeared deliberately and clearly in shot.

“With his slight smile and eyes that twinkled and connected directly with viewers, this Savage portrait has long been regarded as the embodiment of the first Labour government brand—friendly, benevolent, trustworthy and self-sacrificing,” Robinson says.

“Locating his portrait behind Jacinda Ardern’s desk is a sign that she is committed to the mission he started back in the 1930s to rid the country of poverty and unemployment.”

Photographic negatives of this era are commonly made with flammable materials, and must be kept in specialised storage facilities.

Researching and digitising the The Spencer Digby – Ronald D. Woolf Collection is an ongoing project for the museum.

As the architect of state housing and social welfare, Savage was a hugely popular Prime Minister as New Zealand emerged from the Depression.

The portrait was taken by Spencer Digby studio in Wellington in March 1936. After it was printed in the Auckland Weekly News in 1936, it became a feature in the homes of left-leaning Kiwis. It was reproduced again by the magazine on Savage’s death in 1940.

Delivering the Michael Joseph Savage memorial lecture in 1998, Historian Dr Michael Bassett said:  “When I was a small boy, few homes were complete in the working class suburbs of Auckland without a framed, tinted photo of Michael Joseph Savage. It was usually mounted, sometimes with a gilt surround that was out of all proportion to the socio-economic standing of the house in which it hung.” Bassett recalled being offered a framed photo by one of his constituents in the 1960s: “It was a simple, Catholic, working class home… There he [Savage] was in the hall next to the crucifix. She picked him down, kissed him, and told me that Savage was the nearest thing to Christ in her life.”