Four toi moko (Māori ancestral heads) have been welcomed today in a solemn ceremony on Te Papa’s marae, after returning to New Zealand from Germany.

The tūpuna (ancestors) began their journey home to Aotearoa in ceremonies at the Berlin Ethnological Museum on 12 October and Göttingen University on 16 October.

At 8am, tearful karanga (calls of welcome) by local female elders spiritually reunited the four tūpuna with their homeland.

Once they were placed on the marae, fine feathered cloaks were draped over the travelling cases containing the tūpuna. Karakia (prayers) were said and the waiata Te Hokinga Mai (the return home) was sung. Leaves of the kawakawa plant were worn as a sign of mourning.

Te Herekiekie Herewini, the Head of Repatriation at Te Papa, acknowledged the support of the two German institutions who had returned the tūpuna, and also officials from the state and federal governments of Germany.

“We are thankful to our colleagues in Germany for their efforts to return our ancestors to their homes,” Mr Herewini said.

“Elements of the early history between Māori and Pākehā (Europeans) are challenging, and the trade of toi moko is one of these.

“Through the repatriation process we are offered pathways to meaningful reconciliation and restitution not only for Māori, but also for the nation.”

German Ambassador Stefan Krawielicki said it was an honour to participate in the pōwhiri (welcome).

“It was a great honour and privilege for me, and very moving, to be able today to share the emotion and feelings during the pōwhiri,” Mr Krawielicki said. “I now start to understand the importance of the return of the four toi moko to their homeland Aotearoa New Zealand.”

Mr Krawielicki said it was only since arriving in New Zealand that he had learned about the toi moko taken from here to Germany.

“This injustice should never have been happened. I am glad that the ancestors are now back home where they belong. It was the right thing to do. Their very long, wrong journey has finally come to an end in Aotearoa New Zealand,” Mr Krawielicki said.

The iwi (tribal) connections of these four toi moko is not known. They will rest in Te Papa’s wāhi tapu (sacred repository) while additional research seeks to identify their place of origin.

Transiting sacred human remains internationally is a highly specialised activity, governed by Māori protocol and by national and international laws. Te Papa followed additional strict protocols in this repatriation to mitigate the risk of Covid-19. 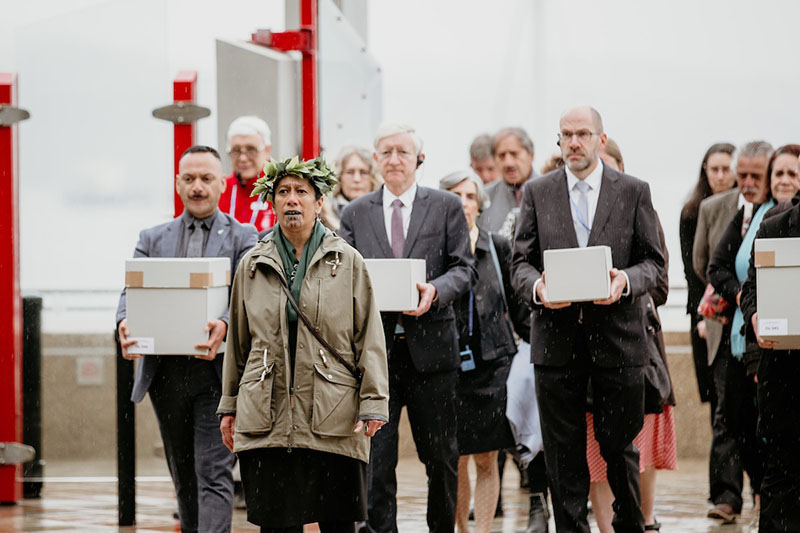 The early repatriation work at the National Museum in the 1980s was led by Maui Pomare (1941-1995), chair of the museum’s Council at the time. Germany was one of the first countries to agree to repatriate Māori and Moriori ancestral remains, with ancestors coming home from the Hamburg Museum in 1991. Since that time museums and institutions in Bremen, Frankfurt, Cologne, and Berlin have returned over 150 ancestral remains to Aotearoa New Zealand. This work has been supported by strong leadership in Germany from the early 1990s, in repatriating indigenous human remains to their communities of origin.

The trade in toi moko

Most toi moko left Aotearoa New Zealand from between 1770 and 1840. They became highly desirable items as ‘curiosities’ for visiting explorers, traders, whalers, and sealers from Europe, Australia, and the Americas. This was due to their unique ‘exotic’ nature, combining the process of mummification with the high art form of tā moko (Māori tattoo adornment), which was chiselled into the skin.

During this period, the heads of rangatira (chiefs) and warriors who had died in battle would be taken by the victors, mummified and traded. Increasingly through the period, enslaved people also became the victims of this trade. This is considered a very dark period in the history of Aotearoa New Zealand.

Comment from Mr Michael Kraus of University of Göttingen: “We have no information on how the two toi moko got from New Zealand to Europe. However, out of respect for the Māori people, especially with regard to the close relationship between the Māori, their ancestors, and their territory, we gladly support the return of the two toi moko.”

Comment from Mr Hermann Parzinger, President of the Stiftung Preußischer Kulturbesitz (SPK), to which the Ethnological Museum belongs: “Today’s ceremony marks the beginning of the journey of the toi moko from the Ethnological Museum back home. For the SPK it is the first repatriation of ancestral remains, and I am very glad that it could take place this year despite the pandemic situation. I would like to thank our New Zealand partners for the uncomplicated cooperation and the fruitful exchange with them. We are constantly learning, through our own provenance research, but also through such exchanges, and we will do everything in our power to continue along this path in order to make amends for historical injustice.”

Comment from Ms Monika Grütters, Germany’s Minister of State for Culture and Media

“The repatriation of the two toi Moko to New Zealand is another important sign of reconciliation to the societies affected by colonialism. The return of human remains has the highest priority in the processing of colonial collections. In a respectful dialogue with our partners in New Zealand, we have found an amicable solution to this problem. Thus we once again stand up for our historical responsibility for the reappraisal of German colonial history.”