Bug Lab is a science exhibition like no other, presented not by humans but by the incredible bugs themselves.

Enter the bugs’ world, marvel at their talents, and witness them in action. Meet the greatest of these micro masters and face their most fiendish tests. Can you fathom the dragonfly’s speed, beat the mantis’ reflexes, or defeat the giant hornet with your friends and family?

The bugs’ biggest challenge to us is to learn from their genius. Precision flight, swarm intelligence, mind control … bugs did it all first, and they’re still doing it better. What would the future look like if we could match their brilliance?

In our media-saturated environment, museums must stand shoulder to shoulder with blockbuster films and virtual reality to capture imaginations and inspire learning.

Weta Workshop’s Academy Award-winning creative vision and Te Papa’s interpretive expertise have pushed Bug Lab far beyond the realm of your regular natural history exhibition, and will change the way you think about the world beneath your feet.

Transforming trepidation to awe and inspiration …

Discover how humans are applying bug genius to solve complex problems, and imagine what’s possible in the future. 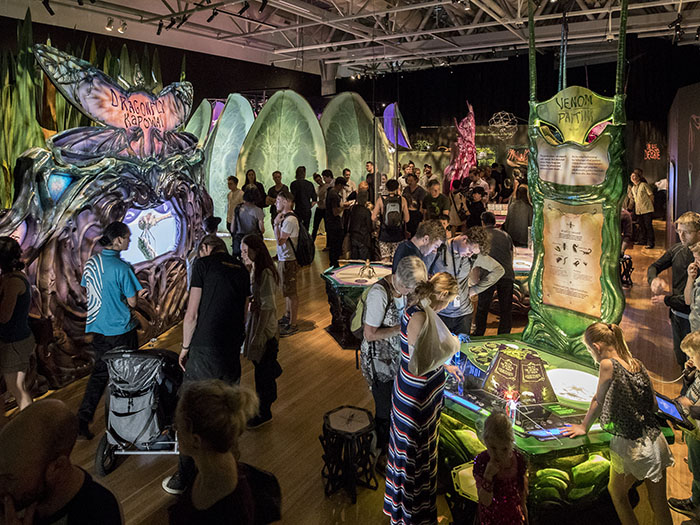 Encounter each large-scale, ultra-realistic bug in a uniquely themed chamber, posed in a dramatic moment that reflects its adaptive ‘genius’ and suffused in sound and light. A large-screen video on the exterior tells the bug’s full story in high definition.

Around each chamber, explore each bug’s adaptive genius in more detail through physical interactives, audiovisuals, graphics, and text – and test your abilities against theirs. 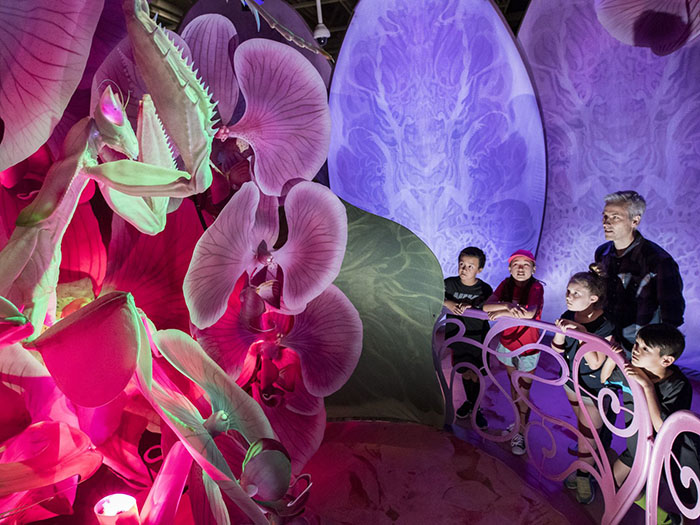 The bug world is teeming with dirty tricks. The orchid mantis is so attractive to pollinators that it doesn’t need to hunt – dinner comes right to it!

The insect’s shape is impressive, but its real secret lies in its colour, which its prey see as even better than a real flower. The mantis waits patiently for a chance to snatch food from the air using its super-fast kung fu reflexes.

Encounter a large-scale model of the orchid mantis, blending into a garden of luscious flowers. Changing light effects show how it is perceived by its prey, and why its ‘advertising’ is so irresistible to its hapless ‘target audience’. Snap! 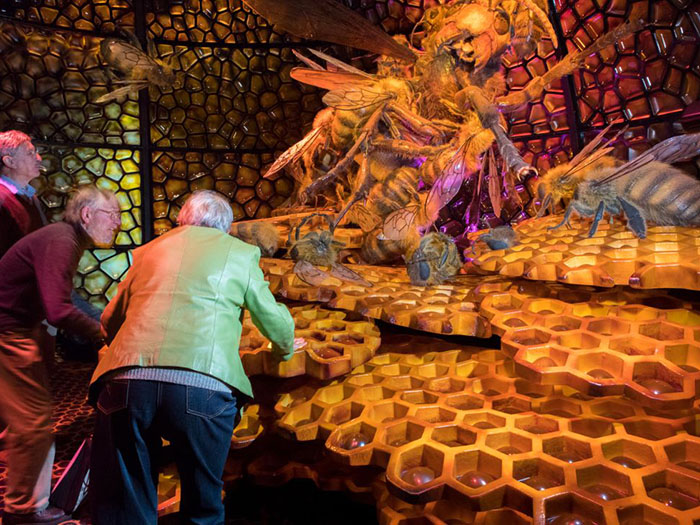 Japanese honeybees work together to defeat an otherwise unbeatable enemy many times their size – the marauding hornet.

To do this, they’ve adapted a behaviour used to warm their hive: disengaging their wings and vibrating their muscles. When a hornet threatens the nest, they smother it, raising its temperature to a level that the bees can just stand but the hornet cannot.

Experience: Heat up the hive

Scramble – the bees need your help! Work together to defend the hive by generating ‘heat’ through movement. Reach the target temperature to overcome the hornet. 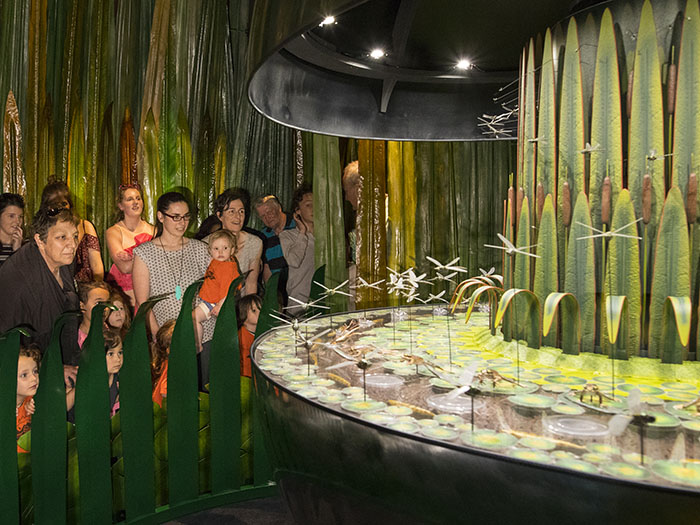 The dragonfly is built for high performance and speed. To catch prey in mid-air, it uses its sharp eyesight and ability to perceive the world at 300 frames per second.

Its flight path means it won’t be seen until it’s too late. By finely controlling the movement of its robustly structured wings, it achieves a stunning strike rate of up to 97 percent!

A huge, hypnotic zoetrope features a dragonfly in flight, with 3-D printed models performing spectacular manoeuvres. Cycles of movement are slowed to less that one beat per second, allowing you to observe exactly how dragonflies achieve their precise flight patterns. 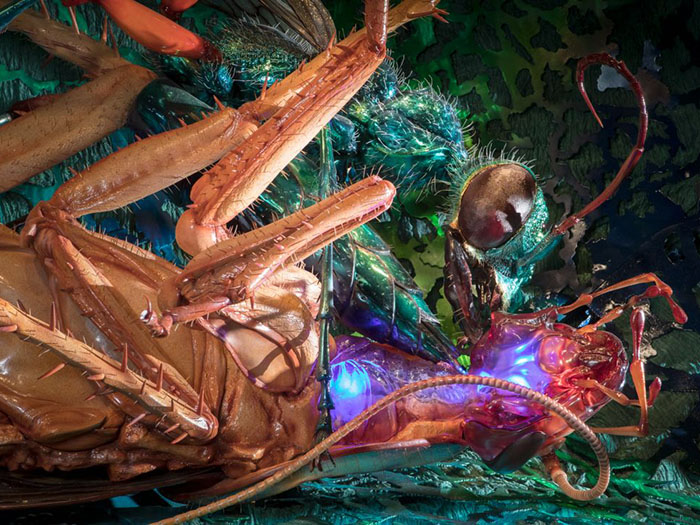 Jewel wasp versus cockroach ... a zombie-horror story that plays out on the forest floor.

The jewel wasp’s life cycle depends on its ability to perform intricate ‘brain surgery’ on a cockroach. With great precision and in a tight timeframe, it injects venom into the roach’s thorax and brain, turning it into a zombie. It then leads it back to its burrow to lay its eggs inside it. That’s one devoted mum...

Witness the iridescent jewel wasp at work. Two large-scale models are locked in a dramatic moment. The roach is crafted out of translucent material, with light illustrating the path of the venom through its system. Glowing, graphic-novel-style panels illustrate the fuller story. 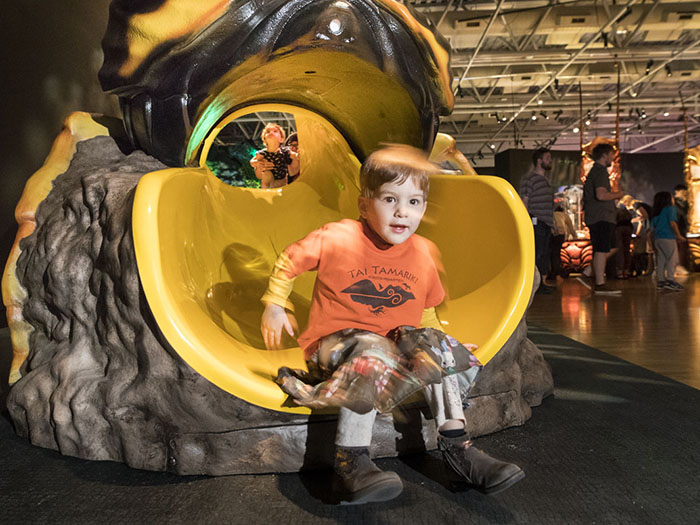 Pick on the bombardier beetle and you’re in for a nasty surprise. This unassuming insect hides a dazzling defence system in its rear end.

When threatened, it blasts its attacker with a boiling hot spray. It does this by rapidly combining ‘rocket fuel’ (hydrogen peroxide) with a catalyst, sending the aggressor scuttling for cover. The bombardier’s tough cuticle – the basis of its exoskeleton – insulates it from the blast.

Younger visitors, explore a model bombardier in firing pose, and slide though its abdomen with ‘explosive’ speed!

The katipo is a member of the black-widow family, which comprises some of the most venomous spiders in the world. Like all spiders, it’s a masterful ‘3-D printer’ of silk. It uses this incredible fibre to build egg sacs, spin traps, and even disperse its young via silken ‘parachutes’.

The katipo perches above the silk lab – a perfect opportunity for a spider selfie! Discover the wonders of silk – from elasticity, to toughness, to biodegradability – and explore how this incredible material might be used in cutting-edge medicine and technology.

Explore the insect world and life cycles through the eyes of New Zealand Maori, and hear their stories of inspiration and learning from these ‘little things with a big impact’.

Have your say! Should we eat bugs? Wipe out the world’s mosquitos? Do any bugs deserve more love? Think again about the ‘creepy-crawlies’ in your life, and how they might help us all. 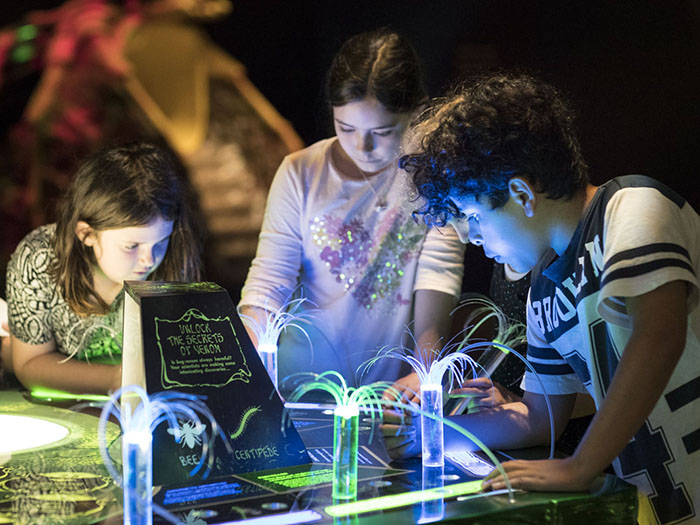 Weta Workshop’s team is headed by Academy Award-winning Sir Richard Taylor as Creative Director. Around the table are many of the creative thinkers and artists who collaborated with Te Papa on Gallipoli: The scale of our war – our most successful exhibition ever.

Content, interpretive expertise, and design skills are provided by Te Papa. Our subject expert, Dr Phil Sirvid, is supported by spider biologist and writer Dr Simon Pollard. They are working with entomological educator Ruud Kleinpaste, AKA ‘The Bugman’, and an international panel of scientific advisors to incorporate the latest science from a wide range of fields.

Te Papa is New Zealand’s groundbreaking national museum, renowned for being interdisciplinary, participatory, bicultural, and fun. In 2015, it attracted 2.3 million visitors to its exhibitions – that’s half the country’s population – and its satisfaction ratings are second to none.

Language
English, with provision for a second language if venues require

Exhibition layout
Modular in design, travels with all components 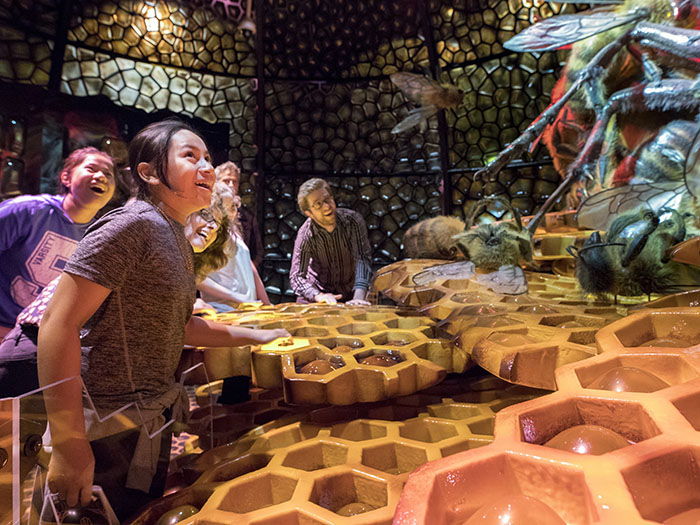 Bug Lab is available as a touring exhibition now.