“I really enjoy the way that they make me think”: Wellington High School’s Rose Wallington on Tony Fomison

Rose Wallington is one of the students who helped co-create Tony Fomison: Lost in the Dark. Here, she discusses the experience as well as the artist.

What interests you about Tony Fomison’s work? Are there any particular themes/ideas that struck you?

My initial reaction to seeing Fomison’s work was kinda lacklustre. It was only after we had started to talk with Chelsea [Nichols, Curator Modern Art] about who Fomison was and how his work was created that I really started to connect to them. I think the way that he depicts his figures, especially in the earlier works I have seen, made me initially uncomfortable. The darkness of the his paintings and the weird manipulation of size and form in his face and bodies.

It’s funny because I also think that that’s what I enjoy most in his works now: staring at his works and kinda just letting myself be uncomfortable, and then think about why I’m uncomfortable, what about these people feels wrong to me.

I’m not sure if that’s what Fomison intended, but for me, what’s striking about his paintings is that they make the viewer confront their feelings of disgust and discomfort, and when you start to think about those feelings I think his works lead you, or at least they led me, into thinking no longer about his paintings but his subjects. Was it the way he showed these people or the people themselves? The figures I knew that lived behind the canvas, as it were.

And I think that’s the thing, that his works question the way that wider society views the people they outcast, while they also reflect his own rejection, his own perversion of real human beings. His depictions of “the other” made me question not just myself, and how I am ingrained with certain assumptions about humanity, but him as an artist, his place as an artist.

I really enjoyed his works not really for what they looked like at all, I still kinda hate the way that they look, but I really enjoy the way that they make me think. In this way I think I mainly connected with his earlier work. To be fair, we did see at lot less of his later pieces (that were on hand in Te Papa), so I feel as if I’ve definitely taken quite a narrow impression of his work, and of him as an artist. Particularly, I would love to know more about his later works exploring New Zealand’s past, Māori history, like Te Puhi o te tai Haruru.

How do you think his work speaks to youth today?

I kinda hate these questions, ’cause, like, “youth today” aren’t a coherent group of people in my mind. Like, Fomison’s works were received in so many different ways by the tiny group of kids that participated in this, you know? So I don’t think there’s gonna be one way that they speak to teenagers, just as there’s no way that they’re going to speak in one particular way to adults.

I also think there’s a massive range in his works. However, to, like, totally go back on myself for a second, I think something that at least I always feel in his works is a kind of confrontation. His works, to me, feel as if they are very interested in contradicting or confronting the viewer on what they take for granted or what they want to ignore. I think alongside that is the very dark tone in his paintings.

If anything, I think the interaction between his themes of identity, the idea of confrontation, etc., would appeal to us youths. In the sense that I think we’re interested in ~discovering~ our own identities and understanding the world around us at a much more complicated level. I think a lot of teenagers are interested in contradicting and questioning what is assumed to be true in society, what is assumed to be the norms, so, like, I feel, if anything, Fomison’s work would play into that. I think his biography would be interesting to most as well.

How has it felt being involved with making the exhibition?

It’s been wicked, honestly. I think I’ve always thought of art history and the humanities as a kind of solely academic field. It’s been really cool to kinda get a grip with how museums go about creating exhibitions, the thoughts and considerations in creating an exhibition space, and the kinda practical side of the whole thing as well. I think it’s been a really cool little window into a lot of different roles and contributions to the process of constructing something like that.

I also really loved it in that I really like learning about art, so win-win. I loved talking to the curators about the works themselves, I loved talking to the organisers and seeing that side of the operations. I also always find it, like, really funny doing these sorts of things, because people are always so surprised by the level of thinking kids have. It’s, like, great for the ego. 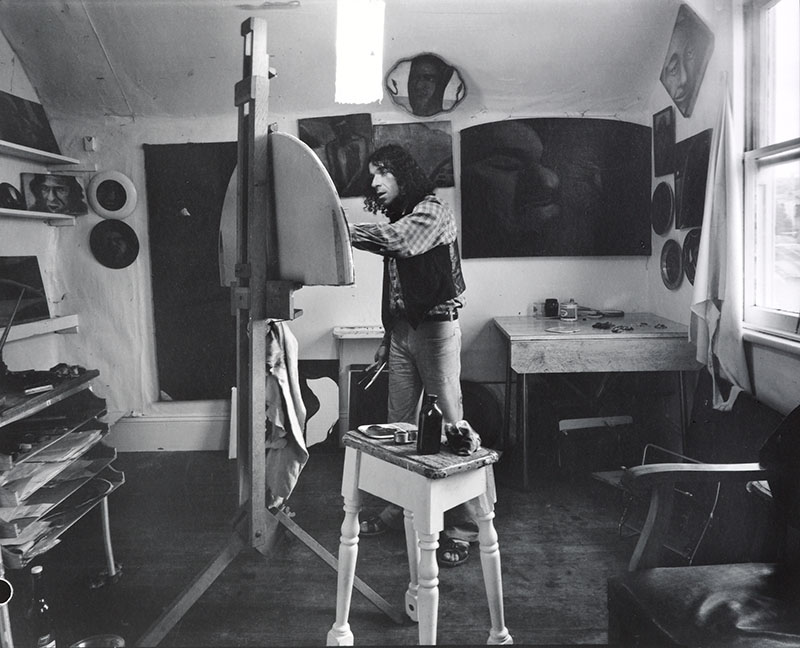 Why do you think people should come see it? What will they get out of it?

Fomison’s work is a really neat little window into questioning New Zealand culture, I think. Like, the works themselves and what they show, but also in Fomison himself.

For this I really think what I said for the first two could apply quite well – that both the things he portrayed, the way he portrayed them, and his decision and his relationship to that portrayal creates a really interesting complexity that opens up these big questions. What does our society value? What have we forgotten? What separates us from one another? Why do these distinctions exist?

I think that’s the biggest thing that I found in his works, and I think that it’s a really interesting lens through which to reflect on those questions.