Just because it’s jewellery it doesn’t mean we have to clam up and be well-behaved.

It’s 30 years since Lisa Walker set off on her journey in jewellery. Te Papa marks this achievement with the survey exhibition Lisa Walker: I want to go to my bedroom but I can’t be bothered.

Iconoclastic and irreverent, Walker challenges traditional notions about jewellery, and questions what it is and can be. Mobile phones, an anatomical hand, and sweepings from her workshop floor are just some of the everyday things she uses to transform traditional understandings of jewellery through her open yet rigorous approach. Aesthetics, materiality, and preciousness have occupied Walker over the years, and her jewellery journey has taken her from New Zealand to Munich and back again. Experimental and unsettling, Walker’s jewellery explores relationships to art, culture, and society – ‘everything is food for art’.[1]

Born in Wellington in 1967, Walker had a childhood that evolved within a life rich in books and craft. Her father, Geoff Walker, was a television journalist who moved to publishing during her teenage years, and her mother, Viv, was a political activist and bookseller – and a resourceful, creative knitter and sewer. It was an open, communal life in which Walker found expression through reading, knitting, and embroidery.

In 1988, Walker entered the newly established craft design programme at Otago Polytechnic (Dunedin School of Art) where, in her second year, she specialised in jewellery. Under her German-trained tutor, Georg Beer, she learned the traditional goldsmith techniques of melting ingots, and forging, rolling, and annealing metal. Underlining the training was the modernist ideology of ‘truth to materials’, reinforced by Swiss-born jeweller Kobi Bosshard. Walker gained important experience by working at Fluxus, Bosshard’s Dunedin workshop and gallery. This sense of honesty, which Walker has described as ‘showing the process in the pieces’,[2] has remained with her – regardless of her choice of materials and techniques.

Walker’s early work looked beyond traditional jewellery forms and techniques. Her project ‘Wire Experiments’, which her father stored for safekeeping, drew on the textile craft technique of weaving. Exploring the possibilities of copper sheet and wire, Walker bent, coiled, stretched, and cut – creating raw, free forms. Her jewellery’s characteristic abandonment of conventions was well under way: ‘It’s about dropping the intellect … and entering somewhere else, letting your hands speak.’[3] 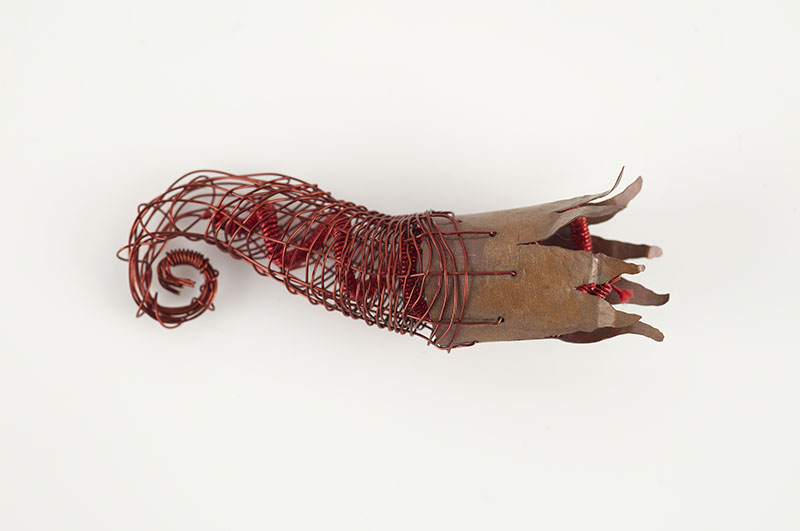 Fresh out of art school, Walker travelled to Europe, Asia, and Australia. She returned to New Zealand two years later, settling in Auckland in 1992. Walker quickly established herself within the city’s jewellery community, sharing a workshop with Matthew von Sturmer and, briefly, Warwick Freeman. In 1993, she co-formed the collective Workshop 6 with three other young jewellers: Anna Wallis, Helen O’Connor, and Areta Wilkinson.

Shifts in the style of New Zealand jewellery were especially visible within the Auckland community, where a conscious use of natural and local materials evoked a move away from European traditions towards a Pacific-located identity. Walker touched on these ideas through her creation of metal forms inspired by the seashore and bush, although the titles Stacks, Folds, and Domes referred directly to the workshop tools and techniques of the trade. Folds, which appeared in the 1993 touring exhibition Open Heart: Contemporary New Zealand Jewellery, showed Walker’s desire to test materials: ‘I prefer to stretch and manipulate sheet metal rather than add to it, leaving few hidden seams or solder joins’.[4] 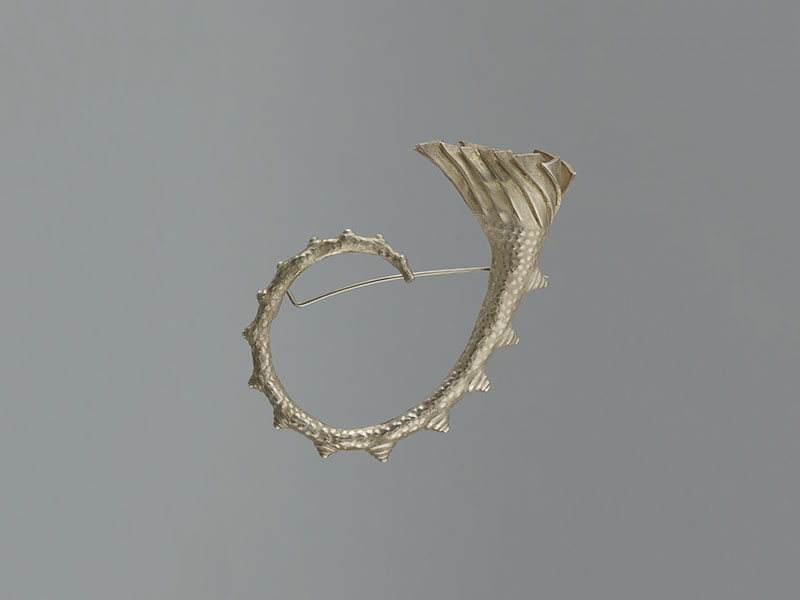 By 1995, Walker was considering moving to Munich, Germany. A lecture in Auckland by the jewellers Alex Murray-Leslie and Karl Fritsch (whom she would later marry) introduced Walker to the possibility of attending Munich’s Academy of Fine Arts. Both were studying there under internationally renowned jeweller Otto Künzli. Walker was to later collaborate with Murray-Leslie (and Melissa Logan) in projects with Chicks on Speed, a multidisciplinary art group that reached cult status in the 2000s.

Munich was – and remains – the European centre of contemporary jewellery learning, practice, and exhibitions, including the annual international exhibition Schmuck, which accepted Walker’s work in 1995. The academy was considered the most esteemed environment for emerging postgraduate jewellers. Künzli’s open attitude to teaching – free from structure while ensuring critique – provided a challenging yet supportive environment. Exhibition-making was an essential element to the programme.

As a student in 1996, Walker travelled with her class to Halle in eastern Germany to visit jeweller Dorothea Prühl, a professor at Burg Giebichenstein University of Art and Design. Prühl’s life in the country informed her work, which included necklaces made of local wood, cut and crafted into large abstract elements. As Walker noted, these works were a ‘stunning touch of form’[5]. Their simple construction has resonated with her ever since.

Starting points for new things jump in occasionally. Recently I started some new pieces after being blown away by snow.[6] 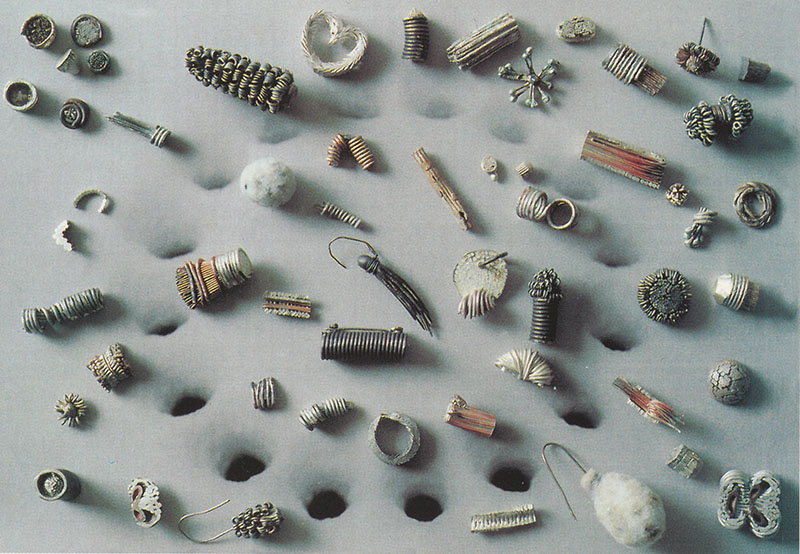 Walker’s early works in Munich continued her enquiry into metal’s possibilities. But the wintry urban environment also opened up new opportunities. In early 1996, the chance discovery of white furniture stuffing in snow led to a major shift for Walker, who was skilled in goldsmithing. The discarded or ‘found’ material changed her direction, leading her to haberdasheries and toy shops – the everyday world. Supported in her creative explorations by Künzli, she sourced fabric, plastic, safety pins, beads, silver dust, and cardboard, to name a few materials, creating small compositions that continued to fit within the definition of wearable jewellery.

Critical to this new direction was the discovery of glue as a jewellery element rather than a hidden adhesive. Walker had unearthed glue’s potential: ‘It’s pretty much a goldsmith’s cheat material, you’re not really meant to use it, and if you do then very secretly. I had to “unlearn” everything I’d learnt in my jewellery training’.[7] 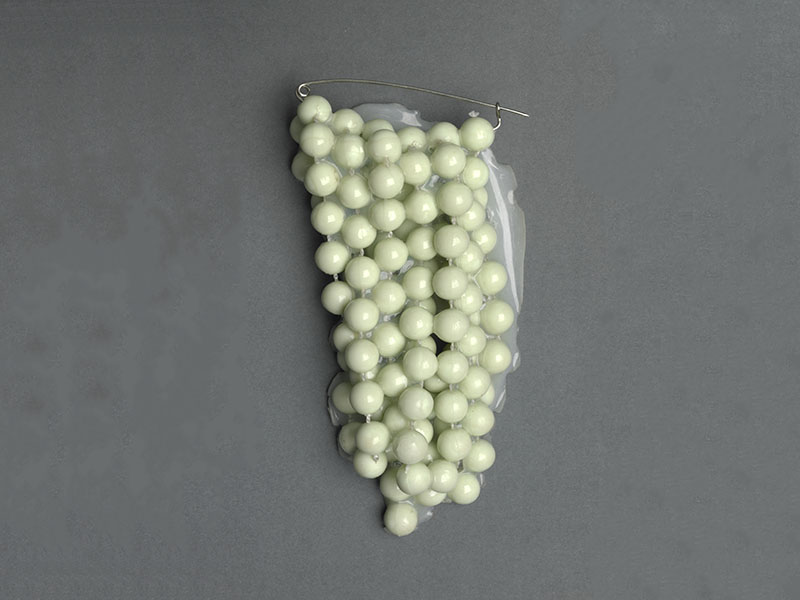 As a fascination for new materials crept into her work, Walker looked back at contemporary New Zealand jewellery’s Bone Stone Shell movement and its commitment to local identity.  Although Walker felt ‘an obligation to be a dutiful New Zealand jewellery daughter’[8], she nonetheless subverted what she saw as the movement’s pious approach, choosing symbols of agriculture, such as plastic sheep and fake grass, rather than sacred pounamu (New Zealand greenstone) and other indigenous natural materials.

I worked with some materials from the rubbish bin in my workshop. I wouldn’t usually do this as for a material to actually reach the rubbish bin, really means it’s rubbish.[9]

As the everyday world became her subject, Walker continued to search widely for objects and materials not traditionally associated with jewellery. And if the studio was her working world, why not consider using the discarded object – rubbish from the bin – the lowest order of value? Shavings, dust, paper, plastic, and glue were worked into unique compositional brooches.

Walker’s 2004 postgraduate exhibition laid out the results of her study on trestle tables painted yellow. Her rigorous approach could be seen in her instinctively worked pieces that questioned precision, aesthetics, and value. Walker’s exhibition catalogue hinted at a future desire to unify publishing with practice.

I need to make my work back in New Zealand again, I need to live there again.[10] 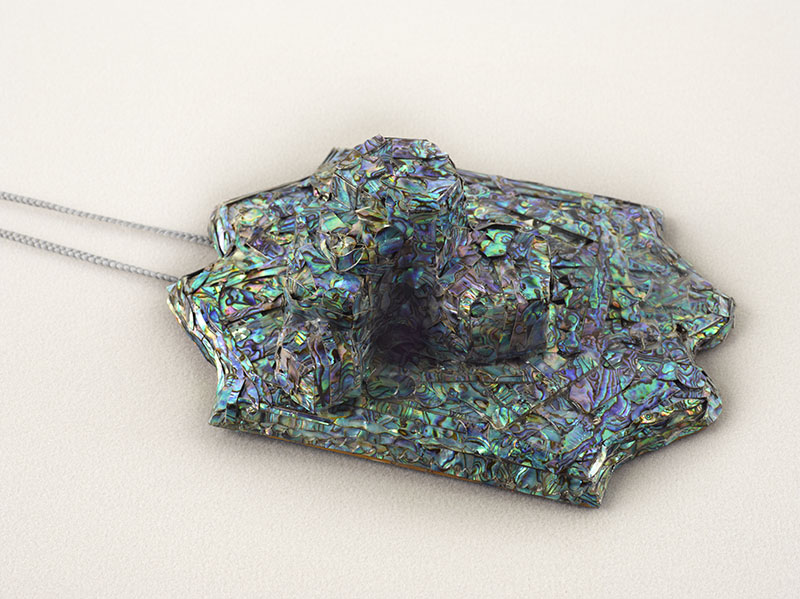 In 2009, Walker’s decision to return from Germany to New Zealand brought her closer to biculturalism and the legacy of this country’s jewellery history.

As an artist I recognise that I have been brought up Pākehā, but am intrigued about addressing this mixing of culture in my life and society as a whole. I interpret this in different ways in my work, and have no answers.[11]

Pendant (above), made a year after her return, updates the hunting ground of the Bone Stone Shell movement from the beaches and bush to online trading, as Warwick Freeman has noted[12]. The pendant form acknowledges the history of the use of pāua, an iridescent shell customarily used by Māori as a fishing lure. It was celebrated by jewellers including Freeman and Alan Preston in the 1980s and 90s. Pāua-shell chip veneer in particular was common in souvenir jewellery of the mid 20th century. With Pendant, Walker draws these histories together while also pursuing her interest in creating new forms – in this case, through the process of covering and layering.

I consciously worked with ‘influence’, purposely using elements from other people’s work in my own. This was exciting at first.[13] 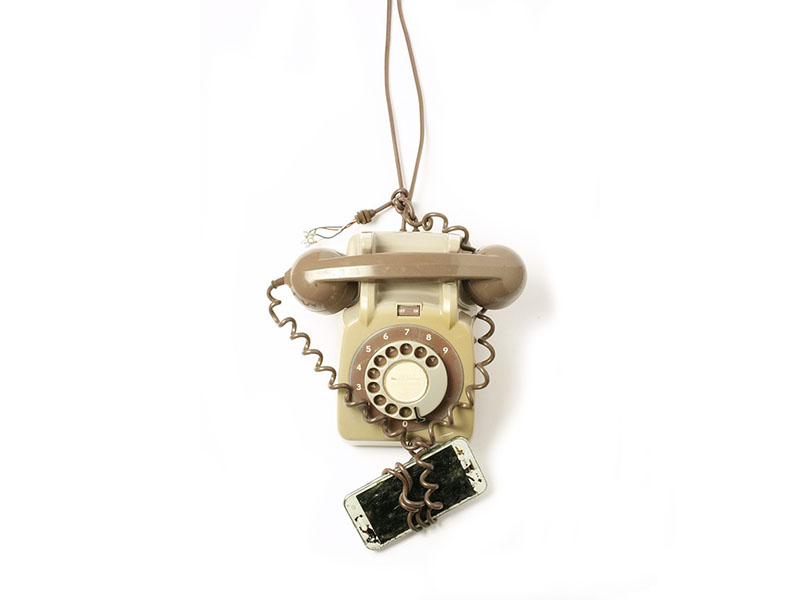 Two recurring and connected themes strike at the heart of Walker’s contemporary practice: appropriation and the ready-made.

Appropriation or authorship is explored through visual and digital images. Pendant (above), for example, is inspired by an Instagram app image by Meatwreck – creative duo Mitra Saboury and Derek Paul Boyle. While the layers of technological change may have interested Walker, the work is mindful too of the reliance of the human body to engage it. Walker borrows the image converting it into a pendant. ‘Thanks Meatwreck’ is written on the top of the rotary telephone, denoting Walker’s interest in authorship.

As the use of phones shows, Walker mines consumer society, drawing on everyday objects – a practice influenced by Marcel Duchamp’s ‘ready-made’ notion. Duchamp (1887–1968), one of the most significant artists of the 20th century, influenced a shift from visual art to art with concept-driven meanings.

Walker relocates familiar objects: stuffed toys and the back of an office chair move from an ordinary existence into jewellery and often the art gallery. Writer André Gali notes that Walker ‘hijacks symbols of consumer society … refills them with meaning and substance and puts them into the conventional space of the art (jewellery) gallery as a fresh, poignant (and possibly aesthetically challenging) critique of that space and the history and culture belonging to it.’[14]

The pendant below, made from an anatomical model, switches from a medical science narrative to the language of adornment. And yet the reproduction of a human hand in this way plays on the emotions. It’s unsettling, but Walker touches and expands on the history of jewellery and its connection to the human body. 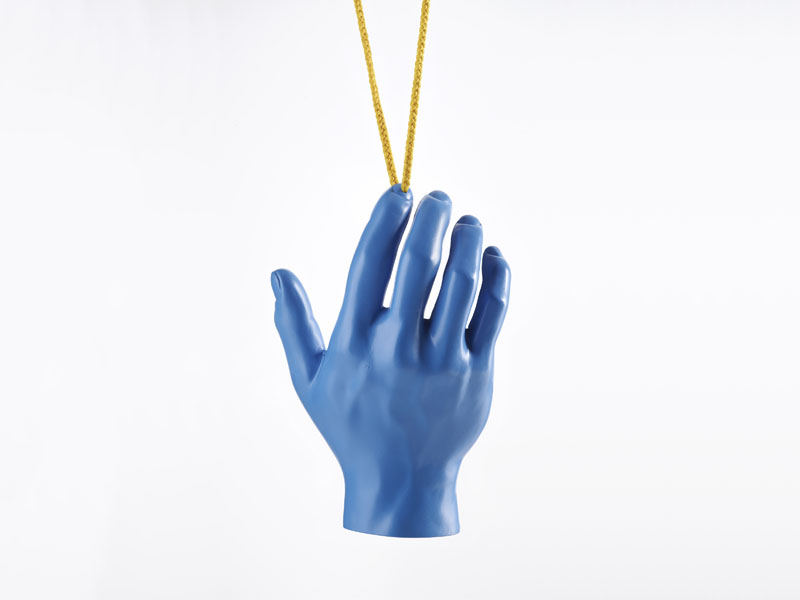 One of Walker’s most confronting works is Necklace. Assembled from taxidermy ducklings, the work shows Walker moving beyond the ready-made into the world of bio-industry. ‘It’s such a bold statement’, says art historian Liesbeth den Besten. ‘[The ducklings] are the leftovers from bio-industry … they [usually] go through the shredder and nobody knows that they ever existed. But these have been made by a taxidermist into these lovely, cuddly things – very soft and very sweet and [yet] repulsive … when thinking about wearing them round your neck.’[15]

The tension between environmental politics and jewellery is so clearly presented. It reminds us of our past too – after all, don’t bird-beak brooches made in 19th-century New Zealand exist too? It’s a connection worth pondering. 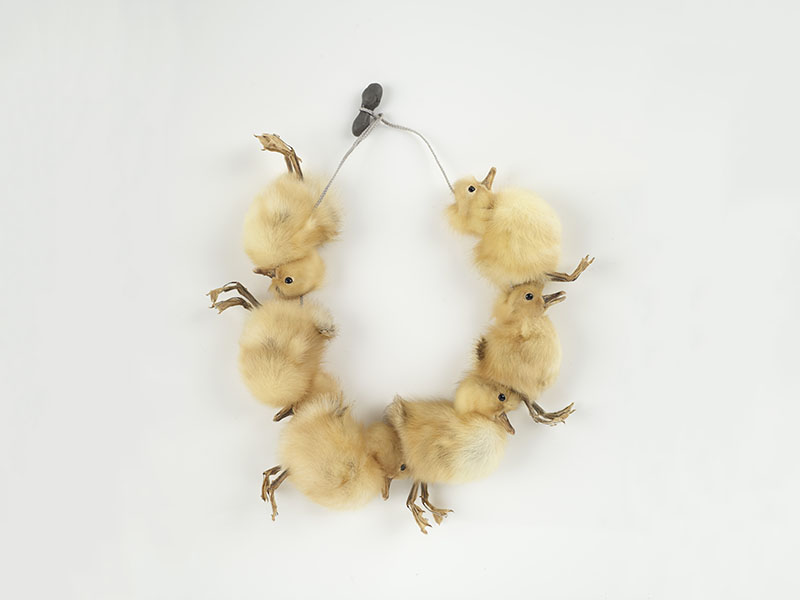 As Walker moves beyond 30 years of jewellery-making, how will her future look? For this inquisitive, irreverent jeweller, whose work closely considers society, culture, and politics, it’s likely to be as provocative as ever.