The filmmaker of the Chinese Languages in Aotearoa – Mandarin video shares her own stories, and what she learned from being part of this project, with Grace Gassin, Curator Asian New Zealand Histories. 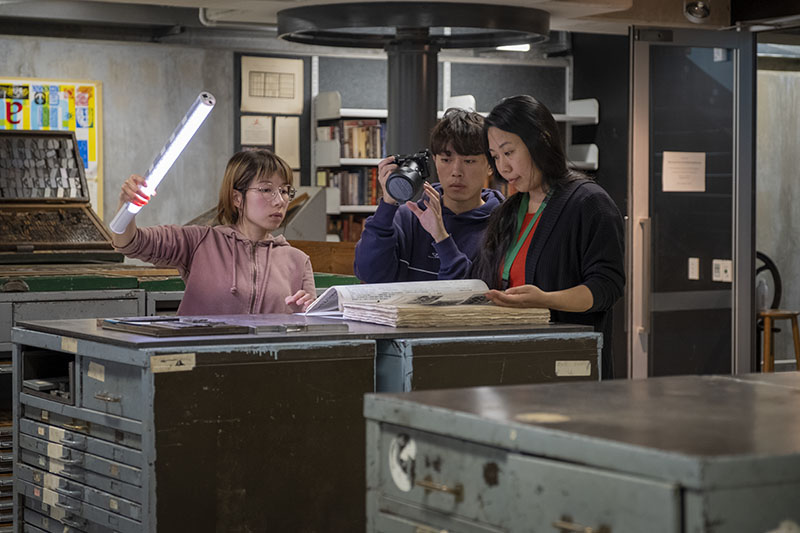 Kia ora, Shijia – tell us a bit about yourself.

I’m originally from Fuzhou, a coastal city in China. Fuzhou is the capital of Fujian Province and it’s a beautiful city. I grew up speaking Mandarin as well as Fúzhōuhuà* to my grandparents.

When I was in China, I was a director of reality shows and so I came to New Zealand to study filmmaking. Creatively, I really love good music, great sound, picture composition, and lighting. The other thing I really enjoy is listening to other people share their stories. I feel like I can experience different things through other people’s lives!

*Note: Shijia uses the Mandarin term Fúzhōuhuà (福州话) to refer to her mother tongue throughout this interview. Fúzhōuhuà is also known as Hokchiu or Fuzhounese in English.

What sparked your interest in this project and its New Zealand focus?

Well, originally I heard from a friend at Te Papa that you wanted to find a filmmaker who could speak Hokkien (although I can’t). At the time, I felt surprised … why is a New Zealand museum wanting to do a video about Hokkien? Because even in China, even back home [in Fuzhou], a lot of people don’t know much about each other’s languages. Like … I’m from Fujian Province and so many of my classmates in China would ask, ‘Do you know how to speak Hokkien?’ When I would respond, ‘No, I only know how to speak Fúzhōuhuà’, they would get confused. They couldn’t work out the fact that there are other regional languages spoken in Fujian Province that are not Hokkien.

So I feel it’s interesting to see people in New Zealand thinking about a question that many don’t know or think much about in China. Why does it interest people here? After that, I did some research and then I learnt more about [the history of] Hokkien, Cantonese, and Hakka and also, like the Wu language family, including Shanghainese and Zhejiang-hua. So I thought it would be interesting to be involved in this project.

As a speaker of two Chinese languages, when do you usually speak Mandarin and when do use Fúzhōuhuà?

Fúzhōuhuà sounds completely different to Mandarin – my classmates, they often thought it was like Thai or something, it didn’t sound like a Chinese dialect to them at all! When I speak Fúzhōuhuà though, I need to pause and think about how to say things, but I can use it well in small talk with my grandparents about domestic life.

Many young people of Chinese heritage – in New Zealand, China, or elsewhere – no longer speak the heritage language of their parents or grandparents. Do you feel lucky that you can speak Fúzhōuhuà?

Yes, I think so. I remember when I entered primary school, the school just encouraged students to speak Mandarin and there was a slogan to encourage us, which means something like, ‘If you learn Mandarin you can confidently move around the whole of China’.

When I was in high school though, from that time on, the school or newspaper started to encourage us to protect our dialect, rather than only speak Mandarin. So this was a little bit different compared to my primary school time. I feel like my generation, like my classmates, most of them don’t know how to speak Fúzhōuhuà now, yeah.

In the video you directed, Ya-Wen discusses her own Taiwanese New Zealand family’s complex relationship with Mandarin. What was it like working on that video? Did you learn anything new?

Ya-Wen is very articulate and already had a good idea of how she wanted to tell her story when we met. This was new for me as when I’ve done these kinds of videos in the past, many interviewees, they were shy! I found that, with Ya-Wen, I didn't need to give her too much direction and was able to focus instead on adding depth to and making links between the various things we discussed. This also made the editing process a lot smoother. You guys also gave us a lot of creative freedom, so this time I tried a few things that were new to me and I also did everything by myself for the first time, most of the filming, editing, and colour grading. So I felt quite, quite … a great sense of achievement!

On a more personal note, when I was editing [Ya-Wen’s video], I tried to find some pictures related to Taiwan for it and ended up ringing my uncle in Taiwan. I didn’t tell him what the video was about, I just told him that I was editing and that I’d like to have some pictures, so if you have some magazines or old newspapers can you please take photos and send back to me. And then my uncle started his story. He told me that when he was in school in Taiwan the teachers would hold the ruler to hit your hands if you didn’t speak in Mandarin. I felt quite surprised because it was exactly the same as Ya-Wen’s story, except that my uncle was like Ya-Wen’s parents’ generation.

After all the pressure to speak Mandarin and discouragement from speaking other Chinese languages, does your uncle still speak Fúzhōuhuà?

Yes, he can speak Fúzhōuhuà, Hokkien, and also Mandarin. But then, he feels that it [the harsh disciplining] was quite good because he can speak Mandarin quite fluently now and it’s quite helpful for him to find a job. Yeah.

It is complicated, isn’t it? Because the lesser economic value attached to ‘minority’ Chinese languages has likely contributed to their marginalisation.

Yeah – and another thing is, that, because my grandmother was a Chinese language teacher in China, she can speak Mandarin and so, when I was a teenager, I felt that speaking Mandarin means you are a well-educated person. So in the past my feeling was that … if I speak dialect in some public place, I will feel … am I from some rural place? I had this kind of feeling before. But now I feel it's great that I can speak my dialect, even though I'm not an expert at all. And now in Wellington, when I hear the familiar sound of Fúzhōuhuà, it brings me a sense of belonging.

I suspect that feeling remains common, although the growing popularity of Chinese language revitalisation movements around the world hopefully change this in future!

As for you personally, what’s next on the horizon?

Although I’m doing it less now that I have a full-time job, I really enjoy doing outdoors activities like camping or swimming in the sea after a long walk near Karaka Bay. I hope to get the chance to do more of that in the future!