The filmmaker of the Chinese Languages in Aotearoa – Cantonese and Hakka videos shares his own stories, and his reflections on being part of this project, with Grace Gassin, Curator Asian New Zealand Histories. 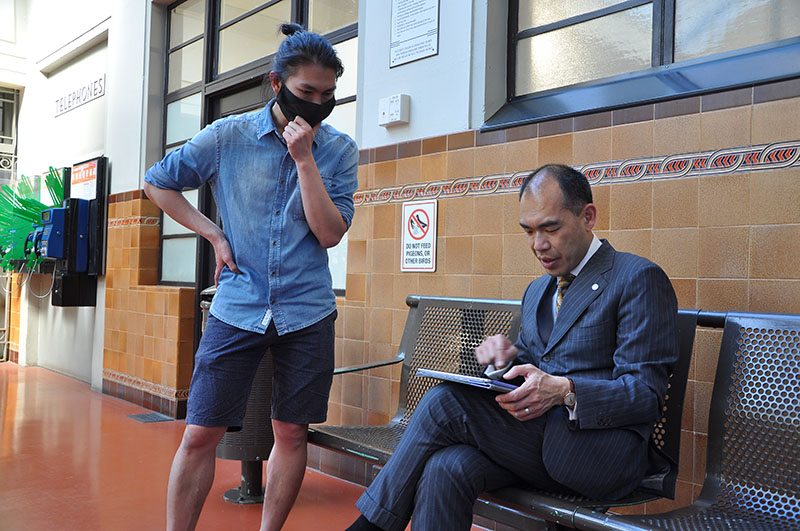 Yong-Le Chong (left) with Henry Liu during the film shoot for the Hakka video, 2021. Photo by Shijia Chen, courtesy of Shijia Chen

Kia ora, Yong-Le – tell us a bit about yourself.

My family moved over to New Zealand in 2005 and ours is quite a typical Chinese Malaysian migration story. My parents wanted a better future for the next generation, so they sent their kids overseas for tertiary studies. They chose New Zealand because we already had lots of other relatives here and my siblings, they all went through high school and university here. I actually did my studies in the United States and moved over once I completed my own studies. At first, I worked here for a couple of years with community radio and then hit it back to Malaysia and worked in KL [Kuala Lumpur] for five years. I decided it was just not for me – I’m not really a big city type of person and the traffic drove me nuts! So I thought, let’s give New Zealand another go and I've been here ever since.

How did your work on this project build on or differ to other things you’ve done in your professional life?

Well, this project has given me my directorial debut, which is awesome!

It’s vastly different to what I do in the rest of my professional life. I usually work as a sound editor, but for this project I’ve had to deal with editing the picture and all that stuff as well, so that was a good challenge. The great thing is that, coming from a solid audio background, you tend to know how to weave together the sound bites, how to piece things together and pace the whole thing quite quickly and intuitively. I think that was an advantage for me.

Obviously, for this project, you also had to use several different languages. Apart from English and Hakka, you also speak Hokkien, Mandarin, and Cantonese. How did you come to know so many languages?

Growing up in Malaysia, my dad sent me to the same Chinese schools he had been to as he felt that it was important to learn Mandarin. Back then I kind of disagreed … it was just too hard. I mean, to this day it’s still a language that I struggle with. So at school, we spoke Mandarin, English, and Malay. My paternal grandmother though, she had migrated from Dabu county in China’s Guangdong Province and could only speak Hakka, so we spoke Hakka with her at home.

My mum's family is Hokkien, but we actually didn't learn Hokkien until we were a little older. Every time we visited my mum’s side of the family, we all went to my maternal grandfather’s place and there, all the adults spoke Hokkien … but they only spoke English to us. However, we slowly picked up Hokkien just by living in Penang where lots of people speak the language. And Cantonese, I picked that up from watching lots of Cantonese films – a lot of the films Jack grew up on were my dad’s favourite films too.

What drew you to this project?

When I saw your callout for creatives to work on this project I was like … that’s me. What really drew me to this project was the ability to highlight these minority languages which I hold quite dear to my heart. Hakka especially reminds me of home … not necessarily the physical location of home, but of my grandparents. And Hokkien, that reminds me of my wider circle, my friends. I thought it would be a nice tribute to the languages I grew up with.

I think lots of people of Chinese background feel that way, that these languages remind us of our grandparents. Our elders often play such an important role in transmitting language and a sense of what it means, at a personal level, to be Chinese, don’t you think?

Yeah, I definitely feel that way as well. Actually, the other reason I was drawn to the project was that, a couple years back I started learning te reo Māori and that actually kind of brought me back to my roots a little. After coming here, I just spoke English, English, English. Even when I was meeting with another Chinese person who would probably be able to make conversation in Mandarin or Cantonese or whatever language, I just froze and reverted to English. I don’t know if it was a shame thing or embarrassment, or just wanting to blend in, but after joining te reo classes, I started realising that, actually, I should really be holding on to what I have.

That’s wonderful! I suspect that for many of us, gaining inspiration from te reo Māori language revival is also an increasingly common (though less often spoken of) experience. I can also relate to that experience of freezing, especially when I was younger.

I think maybe the generation before us, our parents, they were less afraid to speak their languages in public. It’s a tough one to navigate though, because like, for me with Hakka, we almost never spoke Hakka outside of home. So doing that is a challenge for me now, especially since I also don’t really have anyone to speak with over here. But I’m trying to teach my daughter at the moment. She knows a few words in Hakka and that’s the extent of it for now.

What was your favourite aspect of working on this project?

My favorite part was getting the chance to meet Jack (Cantonese video) and Henry (Hakka video) and listen to their stories. Even the ‘pre-interviews’ with them, just having coffee together, because that’s where the ideas for each of the videos came from. Although we all come from different backgrounds, I think anyone could resonate with their story for sure.

I’ll admit that I found the film shoot with Jack was a little daunting because I learned my Cantonese from watching Hong Kong movies and from working in KL. But I mean, we all also spoke English, so we could plan everything in English before the shoot!

With Henry, I actually felt an even bigger pressure because Hakka is my own language and so I felt like I had to make it ‘right’. But also, Henry is a professional linguist, so…

…not intimidating at all!

No, not at all [laughs]. We also speak slightly different variants of Hakka. But when we started talking, he really put me at ease and reassured me that he could understand what I was talking about!

Yong-Le Chong (in orange shirt) dines with his family at Little Penang, in a still from the Chinese Languages in Aoteaora – Penang Hokkien video, 2021. Photo by Arthur Hon Sheng, courtesy of Arthur Hon Sheng

As it turns out, you’re also the nephew of Little Penang’s Tee Phee. Her video for this project is notable for its rather wonderful mixture of English and Penang Hokkien. Do you feel like that’s reflective of the sort of environment you grew up in?

Yeah, we grew up with a mishmash of languages and that’s very evident in that video! Also, although we do speak Hokkien to some regular customers of Little Penang who are from Penang, our Hokkien has usually been spoken within the family in New Zealand. So I think, over time, that has also contributed to Tee and others using more English in their Hokkien.

I’ve had some Malaysian New Zealanders tell me that they really liked that aspect of the video. Her language mixing felt very natural and ‘real’ … we tend to cling to the idea of a proper or even ‘pure’ way to speak our languages, don't we? Our ways of communicating are really just a reflection of our unique backgrounds though.

Yes, I think that’s true. I mean, even in Penang, we wouldn’t be speaking ‘proper’ Hokkien per se…

Has this project made you think about your own relationship to your languages?

Definitely. It has got me thinking about passing on the language to the next generation. I’ve got an almost two-year-old daughter and I’ve started speaking to her in a mix of Hakka and English at home, just so she has a little bit of that language. What terrifies me is that from my grandmother passing the language on to my dad, and then him passing it on to me, they probably passed on only maybe 50% of the language. And now, because I’m not that fluent anymore and I’m losing some of the language, I’d probably only be passing on 25% of it. But even though it’s only a little, it’s still something and I see it as a taonga for the next generation. I hope I can help revitalise it within my home at least.

When I went back to Hamilton for Chinese New Year this year, we had a family friend who came with us who was Taiwanese and spoke Mandarin. He asked me, ‘Do you speak Mandarin to your daughter?’ and I was like, ‘No, I don’t speak Mandarin, I’m speaking Hakka to her’ and he responded, ‘Why Hakka? It’s pointless, there’s no use for Hakka, you should be teaching her Mandarin.’ And I felt … I just felt like, okay, now I have a point to prove. For me, with Mandarin, you can always learn it because it’s so mainstream, you can always take Mandarin classes. For Hakka and Hokkien though, that has to begin at home.

Working on this project has also got me researching on my whakapapa as well as Hakka culture, because all I know is food! Not so much ancestral worship, but more of the other cultural aspects of being a Hakka … what does that mean and why do we do things a certain way? It’s interesting to research and it doesn’t mean that I follow everything 100%, but I just want to have that knowledge for myself, and maybe try to preserve some of those aspects.

It’s been a pleasure speaking with you, Yong-Le. One last, parting question — do you have any advice to offer young creatives wanting to follow in your footsteps?

This advice is for anyone who wants to get into creative industries: it’s all about perseverance, patience, a willingness to learn and be open. Also, be rebellious! Don’t let anyone put you down. If you want to be a filmmaker, you have to tell genuine stories and not be afraid to be yourself.