“I think telling diasporic stories, like mine, bring alternative and often undocumented/heavily underrepresented experiences to light.”

Samantha Fei talks about her relationship with Cantonese, which begins in apartheid South Africa. 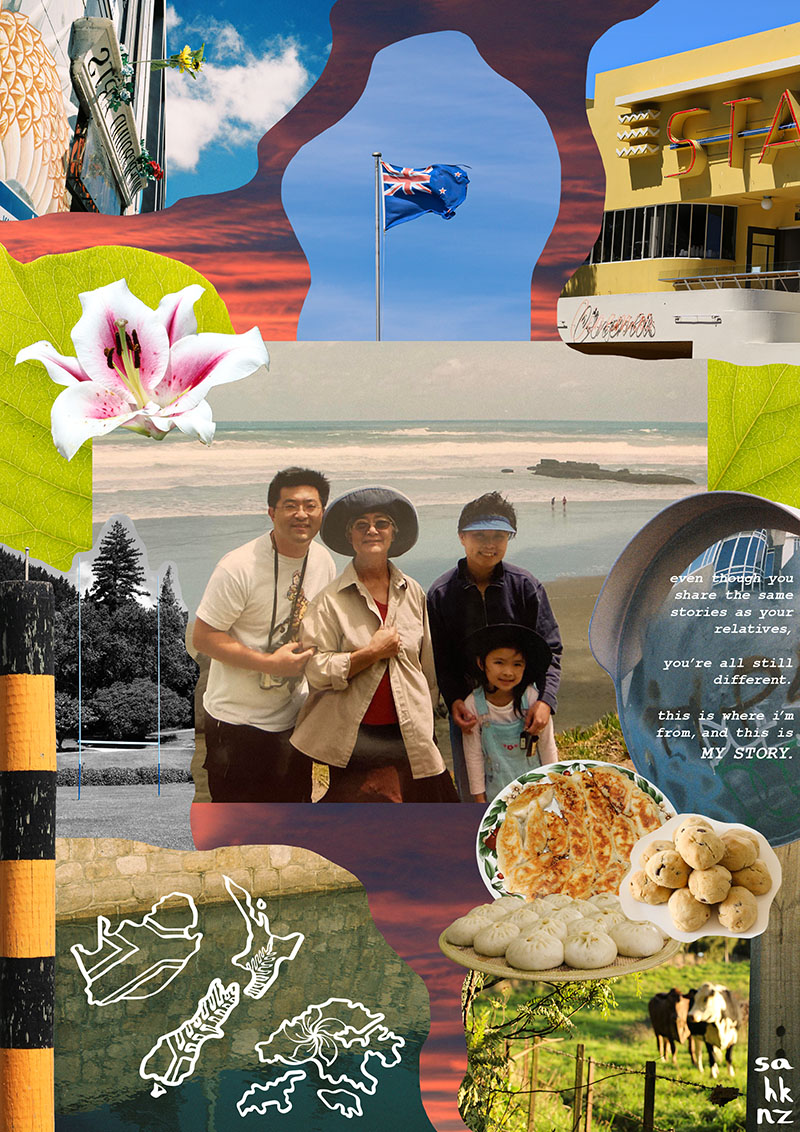 I was born in Aotearoa but my mum is from Hong Kong and my dad is from South Africa. Both are ethnically Chinese. Our family history is complicated, but unique in the way we have retained close ties to our culture despite generations of migration and having to navigate the challenges of being a racial minority, especially during apartheid.

My dad grew up in the 70s–90s in apartheid South Africa. Most of the Asian people in his area were fellow Cantonese people and the restrictions of apartheid brought their community closer.

He went to Chinese school with his friends and family, and although he wasn’t that successful with learning Cantonese there, he and his friends still connected with their Cantonese roots through TVB and Hong Kong entertainment.

They also loved the idea of Chinese food. On the weekend, they often drove from Pretoria (where they lived) to Johannesburg (a completely different city) just to eat some ‘unauthentic but good enough’ char siu bao because it was the only place you could eat Chinese food. (Crazy how now in New Zealand, at least in Auckland, it’s so easy for us to order it!)

My dad and his friends dreamt of going to Hong Kong to retrace their roots and many years later, they all succeeded, some of them relocating there for life, and that is where my dad met my mum. Most of my family has now emigrated from South Africa and everyone is dispersed, yet again, to numerous places such as Canada, Australia, Mauritius, and here, Aotearoa.

I think telling diasporic stories, like mine, bring alternative and often undocumented/heavily underrepresented experiences to light.

For me personally, what has shaped my identity the most are these stories and I would like to open up a new perspective to those who persistently ask me where I am from (you know, that question ‘where are you really from?’).

So here’s my answer: This is where I am from, and this is a part of my story.

Samantha’s is a story of movement, change, and adaptation. In an attempt to capture particular elements from this pool of inspiring precedents, my illustration highlights the now (New Zealand), whilst paying homage to anecdotes from where Samantha’s parents Steven and Kelly were brought up (South Africa/Hong Kong respectively).

The focal point of my arrangement is an image of Samantha’s family from the mid-2000s, one which spoke to me more so than any other photos she provided. I found that in a subtle way, it managed to embody connectedness. No matter where you are at any given time, the cliché stands: home is where the heart is. Framing the main image is a broad variety of other interesting images taken all around New Zealand, some illuminating various passions and memories from that of Samantha and her parents. I decided that throughout my short time travelling over the New Year period, I’d photograph deceivingly intricate and appealing aspects of New Zealand terrain via both digital and analogue formats. The reason being that oftentimes our language, and Chinese sub-cultures as a whole, can be overlooked — if you dig a little deeper, however, there are so many rich and untouched wonders waiting to be enjoyed. The primary portrait, embedded within exterior photographs of New Zealand visuals, illustrates that [Samantha’s family] belong here, among the quirks of New Zealand culture, and symbolises how in Aotearoa we are one and the same, united, together, and slowly approaching a place where we are all understood and accepted.

The hands on, collage-style composition, coupled with contrasting digital and analogue photography, highlights the symbiotic relationship between old and new, tradition and innovation — how the only thing permanent is change and that society must adapt to become more informed and aware, just as minorities with diasporic stories have had to adapt to their situations. With that being said I think, more than anything, Samantha’s story displays strength. In the face of adversity, it is easy to get down on yourself. The constant and ever-present change synonymous with Samantha’s backstory reflects her and her family’s internal acclimatisation to new challenges, a feat only achievable through an unwavering heart.

Something to take away from this is that no one person is from one place. Whilst Samantha’s story may seem complicated, there are many more [like hers] out there. To quote Samantha herself: “Even though you share the same backstories as your relatives, within that sense of connectedness, you’re all still different.”