I had an IUD put in, one of those copper buggers, at the beginning of 2018. I didn’t have sex with men for basically that whole year. It seemed dumb and pointless that I had gone through two confirmation meetings, multiple Ubers to Family Planning, and a deeply invasive procedure for not much seeming point, especially considering that that tiny curve of metal had made me bleed through three layers of clothing for a month. My cotton bedsheets were stained red like a tie-dye T-shirt. My blood levels were borderline. My head was dizzy, but I needed one fitted if I was going to continue this infantile and torturous pursuit of desiring male attention. I’d been very stupid with my body over summer and this seemed like the easiest way not to be told off by every single person of life-significance. So I had one inserted, and spent most of that year nursing crushes on older women.

A woman went down on me while I bled, my first month of being with IUD. I knew I must have tasted terrible because I’d been wearing the same sanitary pad for days. Her unfussy tongue in my miracle stench felt like a curtain parting.

I had a fight about contraception with the girl I was knee-deep in love with. I was going to end up pregnant if I kept being an idiot about unprotected sex with men was her argument. I wanted her to be affectionate and sorrowful, to hold my hands under the bedsheets and kiss me instead of prying bottle caps out of my fingers. To erase my pain from history. My body, a wasteland of touch but all I really wanted was her elbows tangled up beneath me. This is my confession about having straight sex to angle for queer jealousy because don’t think for a second you can separate desire from experience, attraction from what you have been conditioned for. The things I want are inseparable from trauma. Sometimes I wonder whether it means more, that I’m queer, or that I have post-traumatic stress disorder. Both feel kind of like saying the same thing: I’m terrified of my own body.

I’ve been thinking a lot about high school kisses, how easy our bodies were back then. Being kissed in a park in the dark, our mouths warm against the chill snap of autumn. She tasted like the warm earth. How many times have I been in the grips of a gesture and felt totally distant? Our muscles fought through coats, scarves, and concealers to grasp each other’s goosebumps. It was so cold that our puffs of breath joined the fog in the skyline. Later I huddled at the bus stop, alone. I sent a text to someone else I was seeing or maybe not seeing. I didn’t text her back immediately.

I don’t know why I’m drawn to this object so much, but a silver ring fished out of your womb feels romantic. Maybe that’s L-O-V-E, no reason but instinct. I’m not able to separate my sexual and romantic experiences from boring realities, hence why I like the IUD as a symbol of queer experience. I’m justifying my selection now just as much as I do my desires. What if our contraception devices were shaped like wishbones? 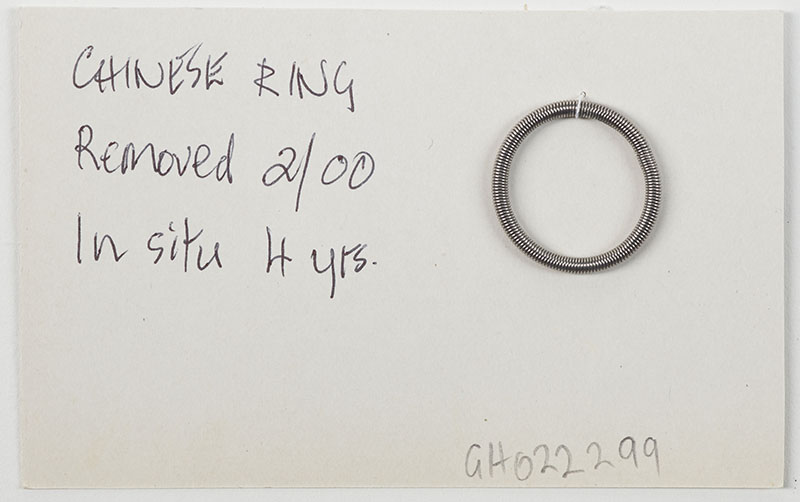 During the procedure of putting a new IUD in the nurse stuck her fingers inside me. It was a cold and mechanical action, standard routine for healthcare. But it is intimate, don’t deny it is, to have someone’s hands inside you. To choose, willingly, to have objects inserted and placed into bumpy canals. I hate and love the feeling of not knowing where my body meets another. How much of sex is just the breath, oxygen circling around twin engines?

You shouldn’t put love stories in a museum. They fester with so much inaccuracy. All my citations might be reduced to rubble by worn out exes, but the feeling remains, an inexplicable attraction that crests through apathy and repulsion. My cervix right now is hormonally induced, coaxed into nonreproduction by a shallow T-shape with a five-year visa. I imagine this strange woman who had a buried circle taken out of her. A whole nation who have kept an infinity symbol in their abdomen, a snake eating its tail. It makes me think that all facts are emotions. I think of the IUD like a dormant cicada buried deep in soil, a piece of history that spends almost its entire life span waiting for a single moment to burst from its territory. I wonder of this mystery woman’s encounters, during those four years that ring remained lodged. If she had any stories she chose to tell or hide.

Vanessa Mei Crofskey is a writer and artist based in Tāmaki Makaurau, interested in violence and intimacy. She is a staff writer at The Pantograph Punch and has a collection of poetry out with AUP New Poets 6.