In this excerpt from Mates & Lovers, Chris Brickell explores the vibrant world of drag culture in New Zealand, when drag ‘jumped off the stage and into the streets’.

Opinions about, and disagreements over, gender questions ran through many aspects of gay male culture, and men revisited and modified older ideas about masculinity and effeminacy during the 1970s. Some wanted to leave conventional ideas about manhood behind.

Liberationists Robin Duff and Martin Oelderink, for instance, argued that traditional forms of male behaviour stopped men from being gentle and caring, and entrenched social patterns and dominance and authority.[1]

Inspired by the spiritual approach of the American ‘radical faerie’ movement, the members of a small Nelson community created an alternative enclave.[2] The Hawkes Bay Gay Society Newsletter mentioned their commitment to ‘the faggot culture and magic lives within each of us’, noting they ‘seriously believe that it is time for Gay men to consciously seek their faggot visions and strengths’.[3] 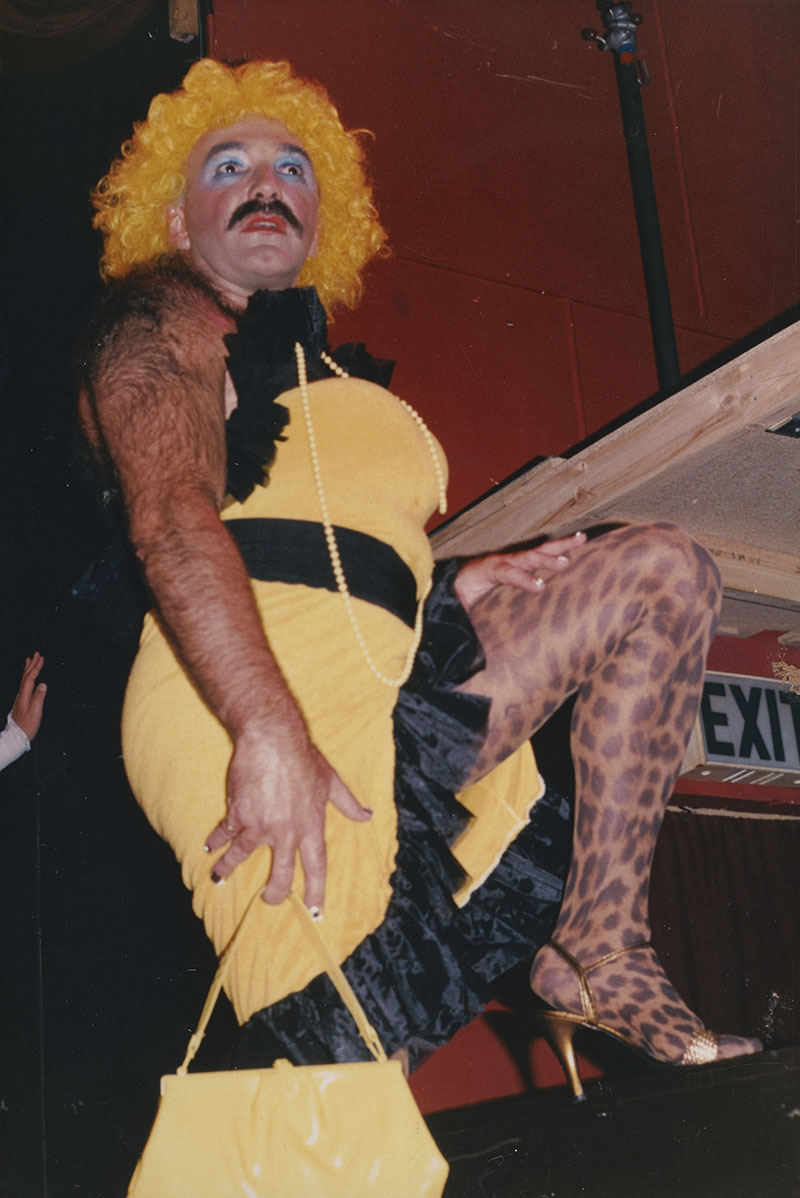 Drag also challenged social expectations of what it meant to be a man. For nearly a century men who dragged up wove together their own artistry and a real or imagined homoerotic culture, but during the 1970s the meaning of drag changed somewhat.

Its new guises, ‘genderfuck’ and ‘radical drag’, did not involve men imitating women in a literal sense. Instead this ‘polymorphous’ playacting – as Peter Wells put it – hybridised masculinity and femininity and made a political statement.[4]

‘An example of radical drag is a man who wears female clothes but who also wears a beard’, Lindsay Taylor wrote in the Christchurch Gay Liberation Front Newsletter. ‘He’s not trying to act like a woman. He’s showing that clothes and behaviour have no relations to a person’s essential masculinity or femininity; he’s showing that our attitudes to masculinity and femininity are conditioned by what society has taught us to believe, and not by what we really are’.[5] 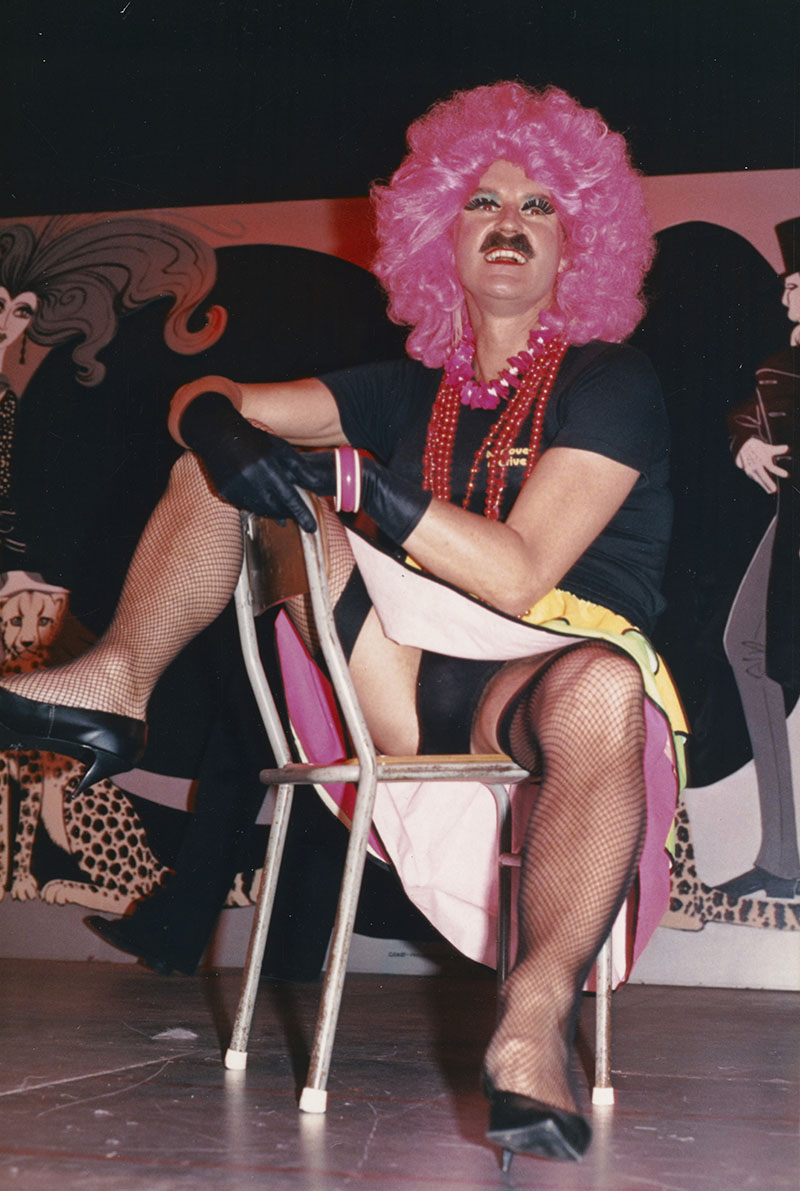 Off the stage and into the streets

Drag jumped off the stage and into the streets during the 1970s, in Auckland and Wellington at least. Johnny Croskery told an interviewer that Wellington had something of a reputation for it:

Many of the guys I knew on the ships from England used to love coming to Wellington; it was so open and there was so much drag here.

They used to bring all of their clothes, and we used to go out on the town while they were here, hop into drag and go out to restaurants, and coffee shops and pubs. There was nothing like this overseas, even in London.

People used to go shopping in the daytime in drag, it was so open. Wellingtonians didn’t bat an eyelid when they saw a drag queen sailing up Cuba Street in full regalia.[6]

Not everyone, though, desired a break with convention. Some lobbyists wanted to include gay men and lesbians in society’s definitions of masculinity and femininity. They railed against ‘stereotypes imposed on us by sexist society’ and rejected the presumption that ‘we couldn’t be real men or women because we’re gay’.[7]

There were many arguments along these lines. Two activists told Truth’s readers ‘we’re not the wrist-flapping queer or tweed-suited lady with the brylcreem hair. We’re just average people. Any one of us could be the girl in the office or the boy next door’, and a Dunedin student group commented that gay men ‘look exactly like male human beings and include All Blacks, politicians, clergymen, and cops’.[8]

In a feature about a male supporter of gay rights, the Sunday Times wrote: ‘He was young, clean-cut. The sort of youth ones meets on a tramping expedition.’[9]

The New Zealand Herald did much the same thing, without even the slightest hint of irony: ‘He seems the sort of young man whom even the most super-protective mother might trust with her daughter’.[10] 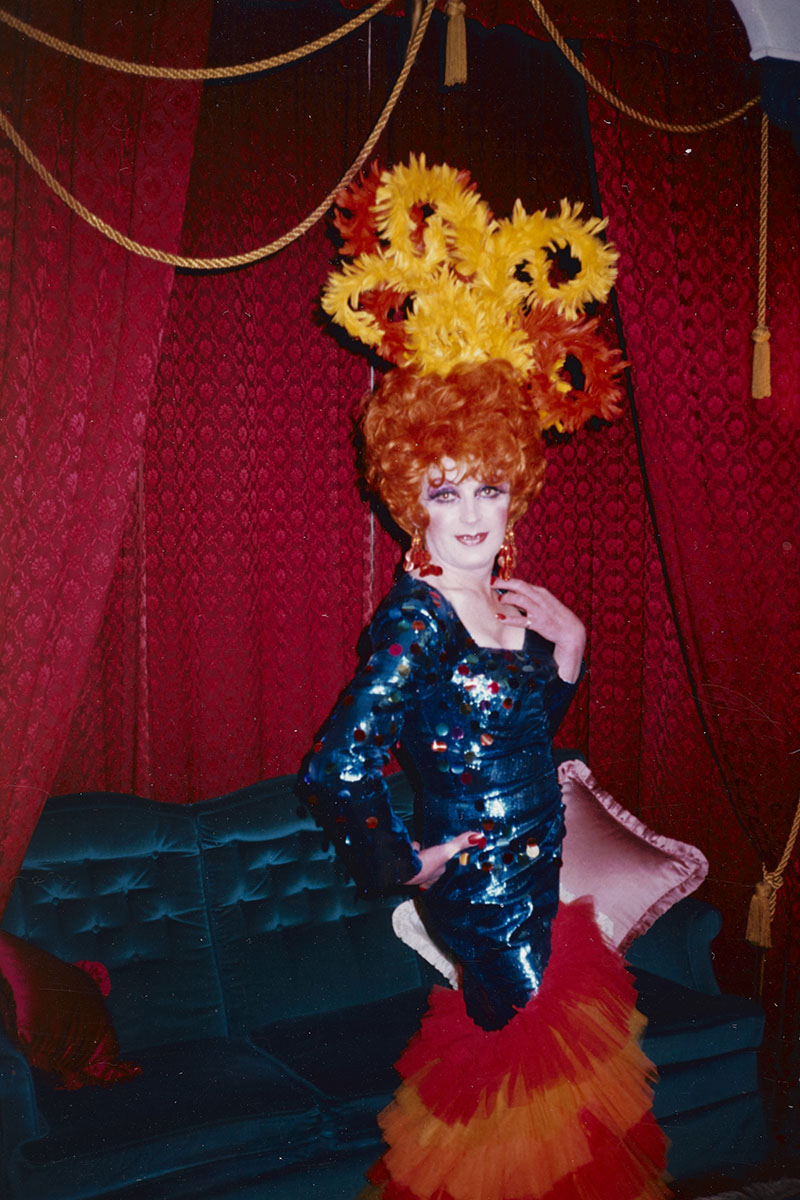 Blending in: a ‘walking contradiction’

Sometimes the desire to blend in revealed itself tetchily. One of the Gay Lib News’s correspondents objected to the staffing of Gay Liberation Front stalls by ‘drag queens out of drag’, and insisted that a ‘straight-acting’ image was preferable to an ‘extravagant’ one.[11] These arguments had a very real impact on those gay men who did not want to – or felt they could not – fit in with the dominant images of New Zealand masculinity. One young Whanganui man wrote:

I am a self-evident homosexual, that, is effeminate, and any attempt by me to endorse the view that most gays look, act, and dress in a similar way to heterosexuals would be a complete waste of time. I’d end up being a walking contradiction, and worse, I’d appear to be apologetic for the way I look.

Now, it’s important to realize right away that effeminacy is not always contrived. Quite often, it’s quite natural to the personality. The effeminate gay must not be made out to be a ‘freak’ amongst the Gay Community in order that society may more readily ‘accept’; the concept that Homosexuality is normal, because that’s oppression, the very thing we’re fighting against.

Not until effeminate people, like myself, can walk down the street without being verbally abused will any real change have taken place in society’s attitudes.[12]

This man was not alone. The activist Sandy Gauntlett argued that drag queens were the ‘most maligned of gay people’, despite their brave resistance to society’s ‘gender programming’, and another writer suggested ‘drags’ were pioneers in the gay movement, having had ‘the courage to “come out” and bear the brunt of straight scorn long before any of us dared to’.[13]

Sometimes, when effeminate men found themselves in trouble, appeals to style and aesthetics provided a defence. A friend of the activist Nigel Baumer was refused entry to the Globe Hotel in Auckland because his clothes were ‘too extravagant’, and he retaliated by asking the proprietor ‘how long it had been since he’d had a look in a Vogue magazine’.[14] 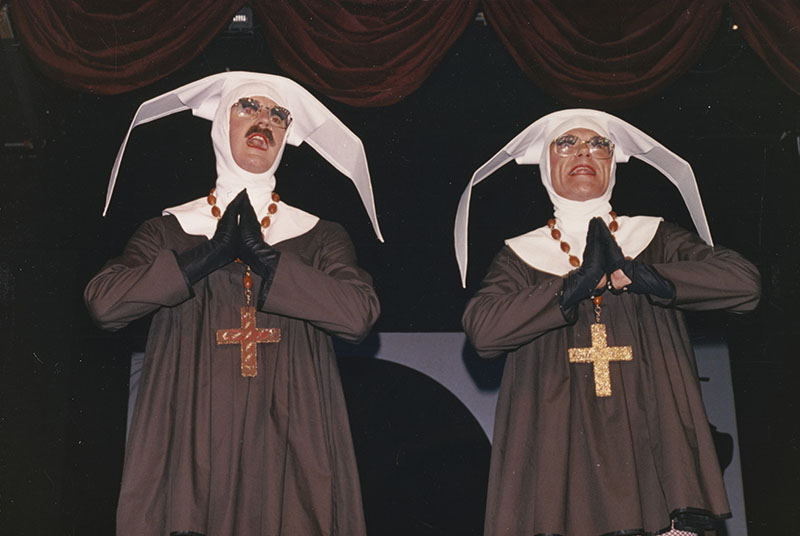 The importance of being camp

A camp aesthetic retained its importance within gay culture. Gay men periodically picked up the old connections between homoeroticism and the archly mischievous, and they suggested these qualities epitomised what it meant to be gay.

One newsletter suggested that camp – ‘viewing the world in an ironic, unserious way, concerned with grace, fun, playfulness, and artifice’ – was an important part of gay life.[15] The newsletter affirmed the existence of ‘a definite camp aesthetic, a gay sensibility that all homosexuals can share in and be proud of’.[16]

Others agreed. They thought ‘group identity’, ‘gay culture’, and a distinctive ‘gay lifestyle’ had to be created somehow, and concluded that camp was the way to do it.[17]