Repatriation: How it all began

The repatriation or return of human remains back to their whānau

iwitribeMāori | Noun has always been part of te ao Māori

In times of war or during journeys away from home, it was customary to return the dead wherever possible, so that their family may mourn over them before laying them to rest.

This custom still survives even today, with many Māori being returned to their hau kāinga hau kāingahomeMāori | noun to be laid to rest in their whānau urupā whānau urupāfamily cemeteryMāori.

By understanding the origins and drives behind repatriation, we are better able to appreciate why Māori, and many other indigenous peoples around the world, have been so proactive internationally and in leading repatriation movements.

Requests for the return of kōiwi tangata kōiwi tangatahuman remainsMāori | noun can be traced back to the 1940s. In Blenheim, members of Rangitāne o Wairau opposed the removal of their ancestors during the excavations at Te Pokohiwi o Kupe (Wairau Bar), from the 1940s to the 1960s.

At the end of World War Two, a group of soldiers from the 29th Māori Battalion planned the retrieval of tūpuna

tūpunaancestorsMāori | noun located in Vienna, who had been taken from New Zealand in the 1880s by Austrian taxidermist and naturalist Andreas Reischek.

In the 1980s Māori were still proactively involved in the return of these tūpuna, and in 1985, through work by museum directors, politicians, and the late Māori Queen Dame Te Atairangikaahu, one of the tūpuna taken by Reischek was returned to Aotearoa New Zealand and buried at Taupiri[1].

In 1988, Ngāpuhi leader Sir Graham Latimer became the legal guardian of a toi moko toi mokopreserved Māori tattooed headMāori | noun that was put up for sale at Bonham's auction house in London[2]. By becoming the legal guardian, Latimer was able to prevent the sale and eventually return the tupuna

tupunaancestorMāori | noun back to Aotearoa New Zealand and lay him to rest.

I can’t prove that he came from Tai Tokerau, that he was Ngāpuhi, but I felt for him. I had an inner feeling that I wasn’t treating the head as a stranger. There was a spiritual acknowledgement.

That same year, the hapū

hapūsub-tribeMāori | noun Ngāti Hau from the Whanganui River travelled to Tasmania to uplift their tupuna Hohepa Te Umuroa. Te Umuroa was sent to Hobart in 1846 as a political prisoner following battles in the Hutt Valley and Porirua. He died of tuberculosis the following year and was buried on Maria Island in a public cemetery.

After three years of negotiations between the governments of both countries, at the request of the hapū

hapūsub-tribeMāori | Noun, he was exhumed and returned home to be buried with his people.[4]

The doctor and politician Māui Pomare and the singer Dalvanius Prime also approached international museums in Britain and the United States, requesting the repatriation of kōiwi tangata to Aotearoa New Zealand.

taongatreasuresMāori | Noun or artefacts, but be ‘treated in a special sensitive manner appropriate for human remains’[5].

His early work was instrumental in the development of a formalised repatriation programme.

The repatriation of tūpuna from New Zealand museums was also taking place. Tairāwhiti Museum and the MTG, as well as the Auckland War Memorial Museum, were working with iwi

iwitribesMāori | noun and hapū to return the tūpuna held in their respective collections, and to develop the relevant policies needed to ensure human remains were no longer accepted into their collections.

It was not only human remains that were the subject of repatriation requests. Taonga were also included in Treaty claims and government efforts.

For example, the 18th century carved sections of pātaka

pātakastore houseMāori | noun known as the Motunui Panels were recovered in 1972 from a swamp near Motunui in Taranaki. They were thought to have been created prior to the 1820s by Te Ātiawa carvers and hidden in the swamp during a period of inter-tribal warfare.

Unfortunately soon after they were recovered, they were illegally exported out of New Zealand and sold with false provenance documents to the private collector George Ortiz. Efforts were made by successive governments, from 1978 until 2007, to secure the return of the panels with no success.

Finally in 2019 after negotiations with the Ortiz family, the panels were returned home to Aotearoa New Zealand. 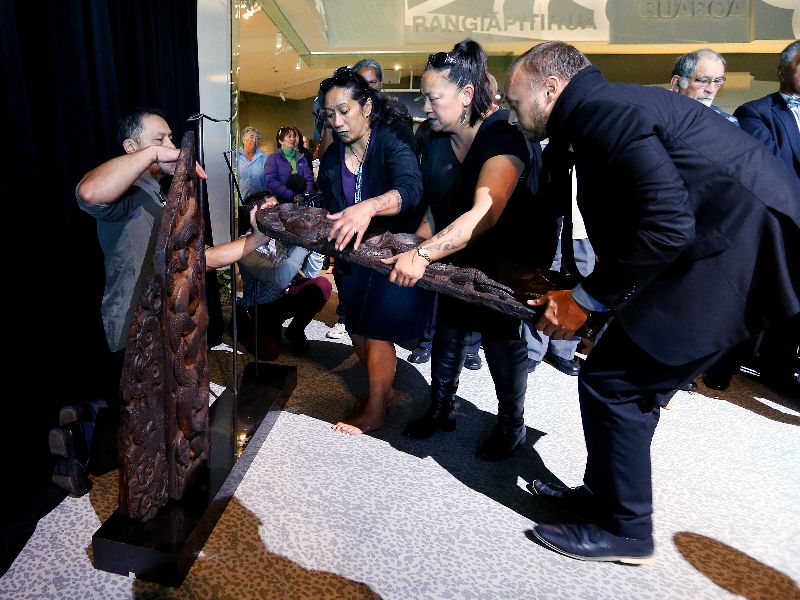 Photo of the Motunui epa or panels being returned to Taranaki during a special ceremony at Puke Ariki which was attended by government dignitaries including Prime Minister John Key. Photo courtesy of Stuff Limited

The Ortiz family entered into good faith negotiations with the New Zealand Government, honouring the memory of their father George Ortiz and his desire to see the panels returned to New Zealand, in reaching this historic agreement.

wharehouseMāori | noun Te Hau ki Tūranga back to the East Coast iwi Rongowhakaata in 2012 – the whare was confiscated in 1867 by the Minister of Native Affairs and Acting Director of the Colonial Museum, James Richards; and the return of a Māori flag, taken by Crown forces in 1865 during the Battle of Omaruhakeke, held in a Scottish museum.

The request for the return of the flag was led by Wairoa Museum, and supported by descendants of key figures involved in the battle. The flag was returned to New Zealand in 2015 and is currently in the care of Wairoa Museum[7].

More recently, Ngāti Kahungunu are seeking the repatriation of a collection of taonga belonging to Ngāti Mihiroa, was well as the return of two wharenui

Next: Repatriation: Where are we now?