Phar Lap was a legendary racehorse and an adored animal hero for a generation of people in New Zealand. You can pay your respects to his bones here, in the country he was born.

Phar Lap started life on a stud farm near Timaru in 1926. His breeder sent him to the Trentham yearling sales in early 1928. Harry Telford, a New Zealand horse trainer in Sydney, spotted Phar Lap in the sale catalogue, and liked the look of his pedigree. He didn't have any money to buy the horse, so he got David J Davis, an American living in Sydney, to put up the purchase price – 160 guineas.

In the autumn of 1930 started his legendary string of successes – he won thirty-three of the remaining thirty-five races in his career. 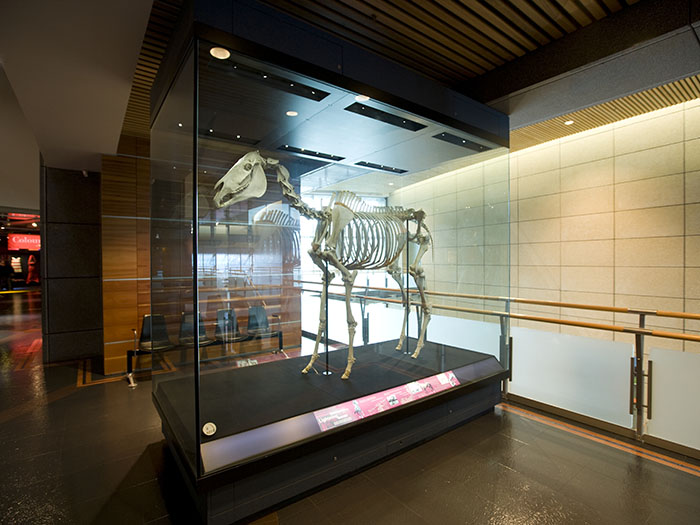 The punters loved Phar Lap, and he invariably started as odds-on favourite. Others were not so keen – someone, possibly a bookmaker, tried to shoot him as he returned from track work one morning in November 1930. He went on to win the Melbourne Stakes that day and the Melbourne Cup, easily, three days later.

The distribution of his remains reflects the claims on him by both Australia and New Zealand. His heart and his hide went to Australia. The heart, at 6.3 kilograms extraordinarily large by horse standards, is in a bottle in Canberra. The hide is mounted on a model of Phar Lap in Melbourne Museum. His bones came back to New Zealand, and are with us here at Te Papa.