Why is That Spider Dancing? The Amazing Arachnids of Aotearoa 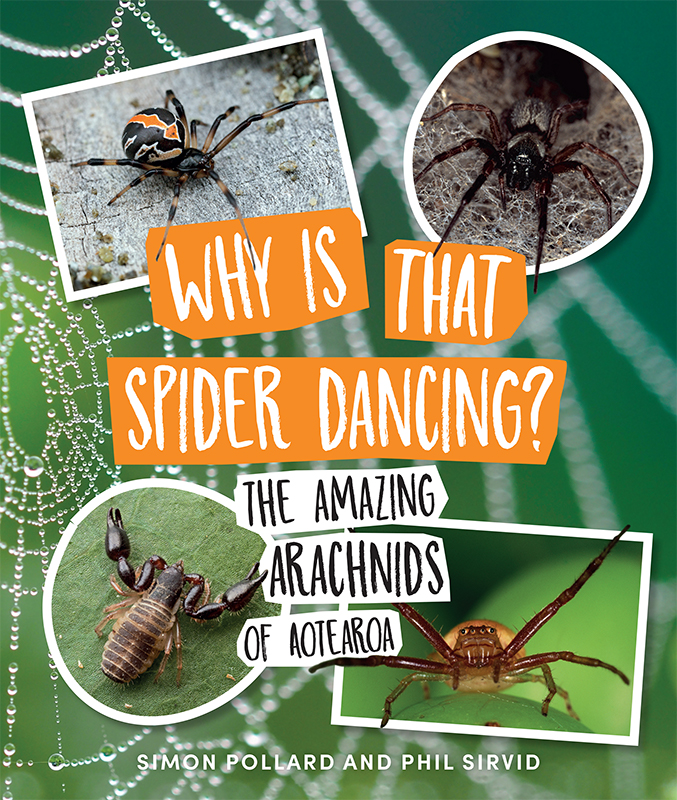 By Simon Pollard and Phil Sirvid

What are arachnids? How do spiders differ from harvestmen, pseudoscorpions, mites and ticks? What makes the arachnid species that are unique to Aotearoa so special? How are webs made? How do they hunt prey, eat and defend themselves? Where do they live? Which are venomous? Which can you find in your house? What makes some arachnids the stuff of nightmares?

In this fun-filled, fact-rich, and highly illustrated book, award-winning science writer Simon Pollard and Te Papa spider expert Phil Sirvid share the magic, secrets, mysteries and marvels of Aotearoa New Zealand’s abundance of eight-legged beasties, from microscopic mites to spiders as large as your hand. They also profile some of the men and women who have helped build our knowledge in this area.

Look inside the book here

Dr Simon Pollard is a spider biologist and award-winning natural history photographer and writer. He has written and illustrated a number of children’s books in New Zealand and the United States and has twice won the LIANZA Elsie Locke non-fiction book of the year. His last two books, both published by Te Papa Press, are Why Is That Lake So Blue? (2018) and The Genius of Bugs (2017), which was shortlisted for the New Zealand Book Awards for Children and Young Adults. Simon has also been an advisor, scriptwriter and presenter on a number of natural history documentaries, including the BBC’s Planet Earth. In 2007 he was awarded the New Zealand Association of Scientists’ Science Communicator of the Year Award. Since 2009, Simon has been Adjunct Professor of Science Communication at the University of Canterbury.

Dr Philip Sirvid is Assistant Curator in the Natural History Team at Te Papa. Phil has a broad general knowledge of New Zealand entomology but specialises in the arachnids, particularly spiders and harvestmen. He has published on the taxonomy, systematics and evolutionary history of New Zealand spiders as well as on medical entomology and arachnid conservation. Phil has been involved in science outreach at Te Papa for many years and contributed to 100 Natural History Treasures of Te Papa, and Nature—Stilled, both published by Te Papa Press.