The colossal squid (Mesonychoteuthis hamiltoni Robson) has been known to the scientific community since 1925.

It was described from two arm (brachial) crowns recovered from a sperm whale stomach at the Falkland Islands, in the South Atlantic; these specimens are in the collections at the Museum of Natural History in London.

The biology of colossal squid remains poorly known. Only nine specimens above juvenile size have been reported since 1925. After examining the large specimens held at Te Papa, scientists at Auckland University of Technology (AUT) have nearly finished redescribing the animal’s morphology throughout its lifespan.

On 1 April 2003 a subadult specimen of a colossal squid (M. hamiltoni) was collected by a New Zealand longlining vessel fishing in Antarctic waters.

The specimen was examined and found to be an immature female. It had a mantle length (ML) of 2.5m, a total length (TL) of 5.4m and, despite being extensively damaged, it weighed about 300kg.

At the time (2003) it was the heaviest squid known to science, and had the longest mantle of any squid measured. The lower beak of this particular specimen had a rostral length (LRL) of 38mm. Having been preserved, this specimen now forms part of Te Papa's extensive holdings of cephalopods (octopus, squid, and their relatives).

Lower beaks of Mesonychoteuthis reported from sperm whale stomachs had been measured up to 49mm LRL. So scientists knew that colossal squid could grow considerably larger. Following the examination of the 2003 specimen, it was predicted that mature colossal squid specimens of up to 500kg could exist in Antarctic waters — a statement which was greeted with skepticism in some quarters. 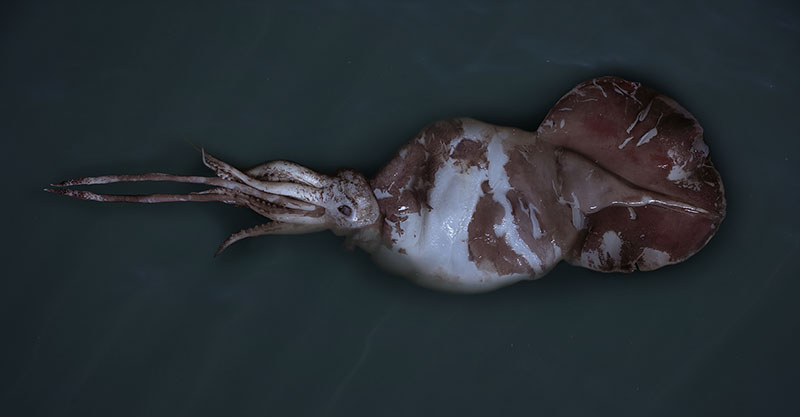 When longlines were being drawn up, a colossal squid attacked a toothfish attached to one of the lines at 1500 metres below the surface. As the longlines were drawn up, the squid hung onto the toothfish and was brought to the surface. Entangled in fishing lines, and attacked by toothfish, the colossal squid was dying when it got to the surface and was unable to be released back into the water. The value of the animal to science was recognised, so it was carefully brought it aboard.

It was weighed at about 495kg, although it was still frozen at the time and contained some ice, so a more accurate estimate is considered to be about 470kg. 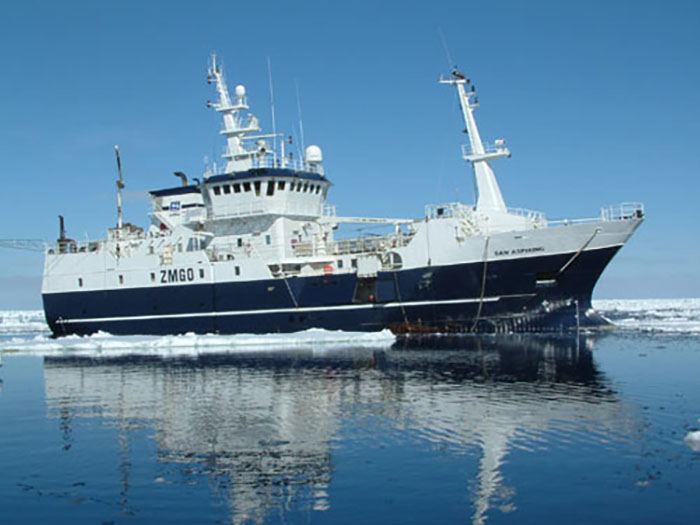 At the time, the vessel was being filmed for a documentary on fishing in Antarctic waters.

Video footage of the animal alongside the boat, being manoeuvred into a landing net, was broadcast widely on television news, and later in a documentary.

This raised considerable public interest in the colossal squid specimen and its ultimate fate when it was deposited in the Museum of New Zealand Te Papa Tongarewa.

This is the specimen now on public display at the Museum.

Parts of the 2008 examination were also webcast to an audience of up to about 3,500 viewers. 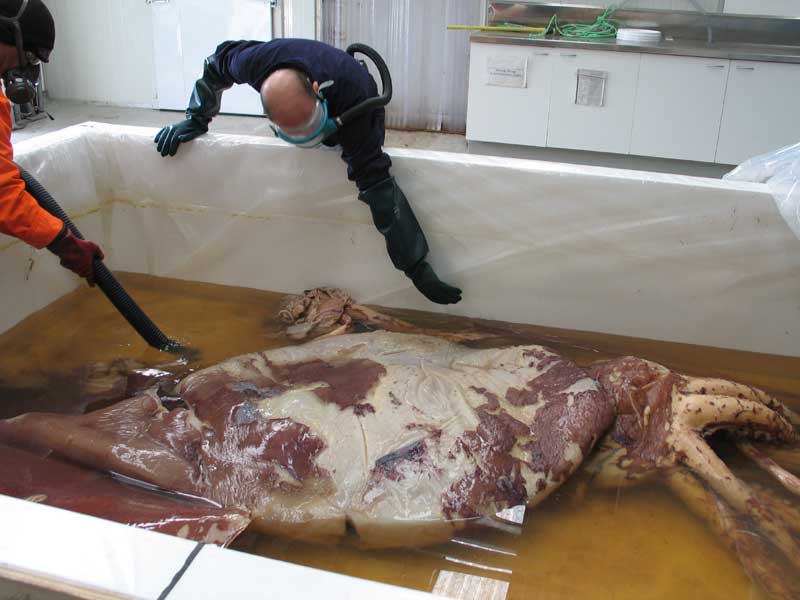 In January, 2014, the San Aspiring was able to collect an additional large, complete (except for the tentacles) specimen.

It was of a similar size to the 2007 specimen and also proved to be a submature female.

This specimen was examined on site at Te Papa by Dr Kat Bolstad and other members of AUT’s squid lab.

The event was webcast, viewed live by more than 800,000 people from over 180 countries, and can still be viewed.

The specimen was preserved and is currently stored in Te Papa's large-animal autopsy facility.