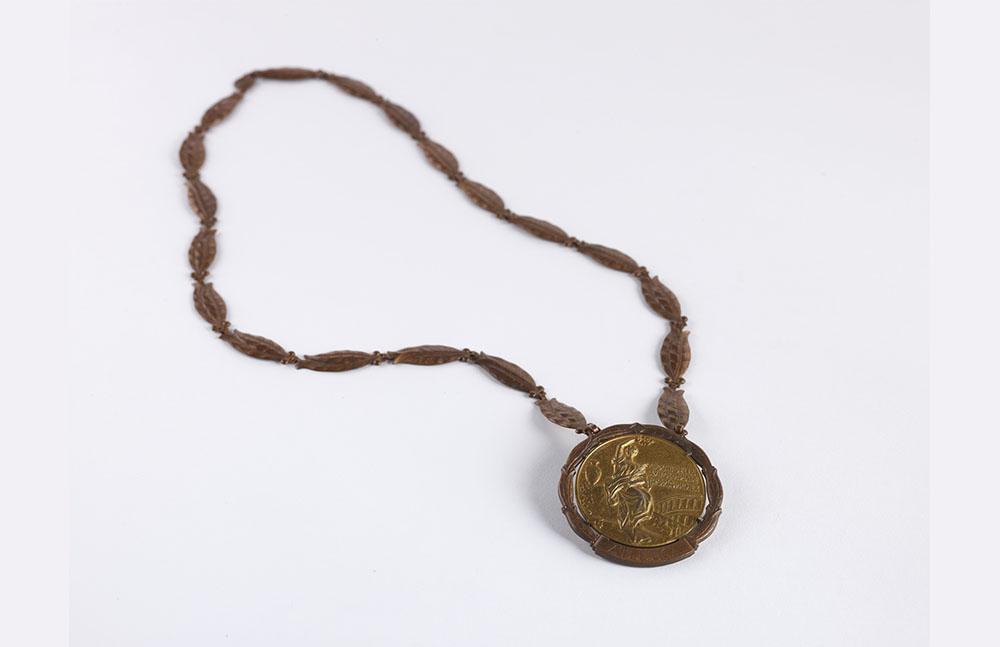 Peter Snell won this gold medal in the 800-metre running race at the 1960 Rome Summer Olympic Games. Some of the gilt has worn away because the medal was touched by so many fans when he came home. 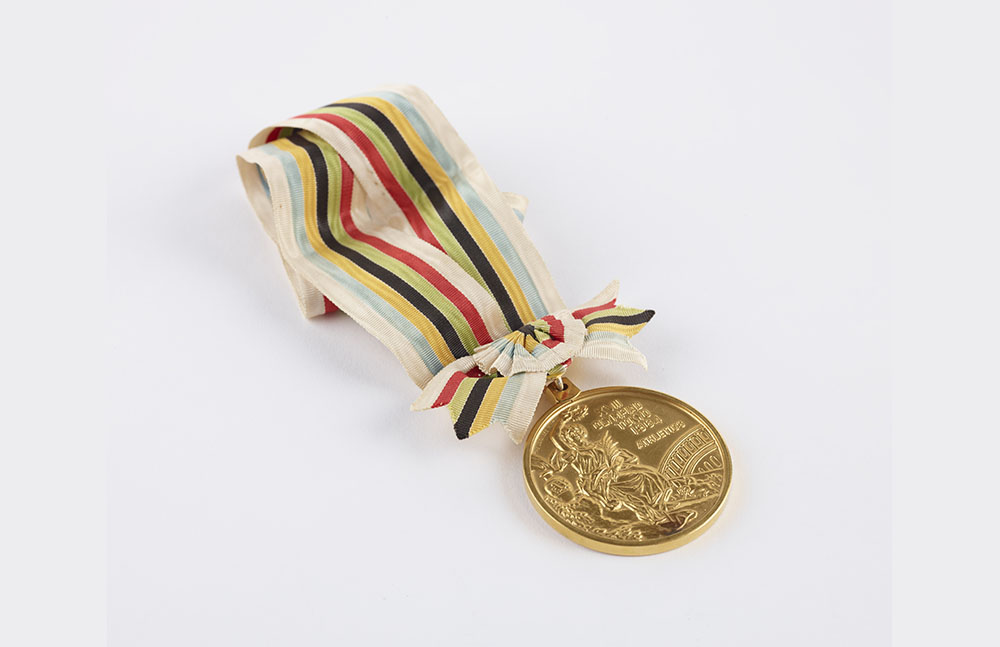 Peter Snell won this gold medal at the 1964 Tokyo Olympic Games, in either the 800 or 1500 metres – at the time, the medals were not inscribed with the event.

The medal features Nike, the Greek goddess of victory. From 1928 to 1968, Summer Olympic medals all featured this same design by Giuseppe Cassioli (1865-1942, Italy). The colours of the silk ribbon are the colours of the five Olympic rings.

Peter Snell won gold wearing this shoe in the 800 metres at the 1960 Rome Olympic Games.

Brothers Arthur Lydiard (1917–2004) and Walter (Wally) Lydiard (1920–1994) worked in shoe manufacturing in this period, and experimented with producing better road running shoes than were available at the time. Wally began by creating a running shoe which was endorsed by Arthur. Then a limited number of spiked track shoes were made including this shoe worn by Snell at the Rome Olympics.

The other contenders in the race were wearing Adidas. The company gave free shoes to every finalist except Snell – they didn’t consider him a medal prospect. But when he won the semi-final, Adidas sent him some shoes. Snell stuck with Lydiard’s. 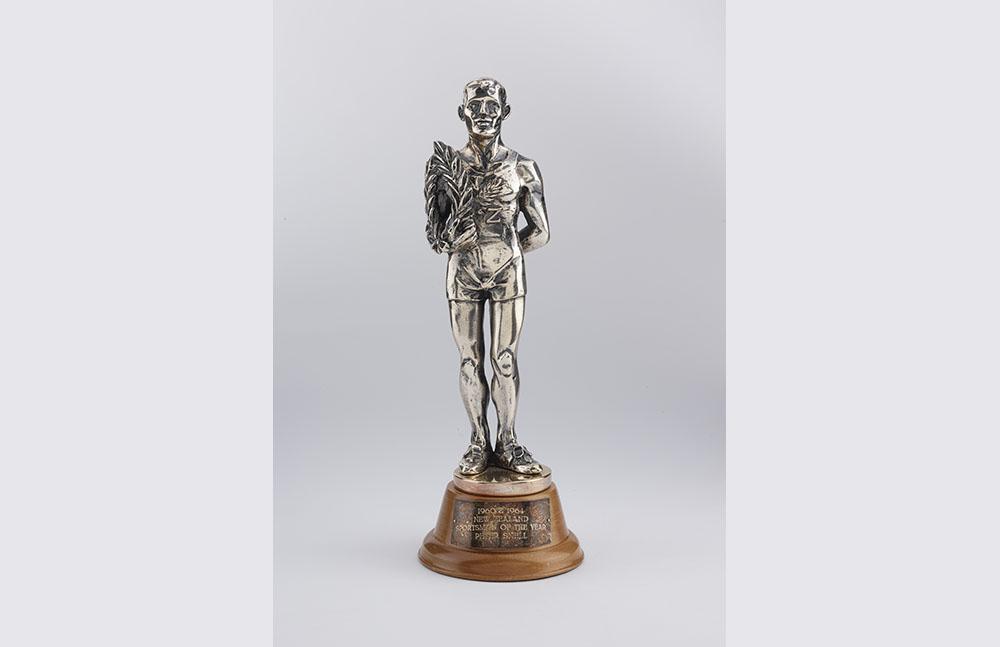 Peter Snell was awarded this trophy for Sportsman of the Year in both 1960 and 1964 in honour of his achievements at the Rome and Tokyo Olympic Games. In 2000 he was named New Zealand’s Sports Champion of the 20th Century. 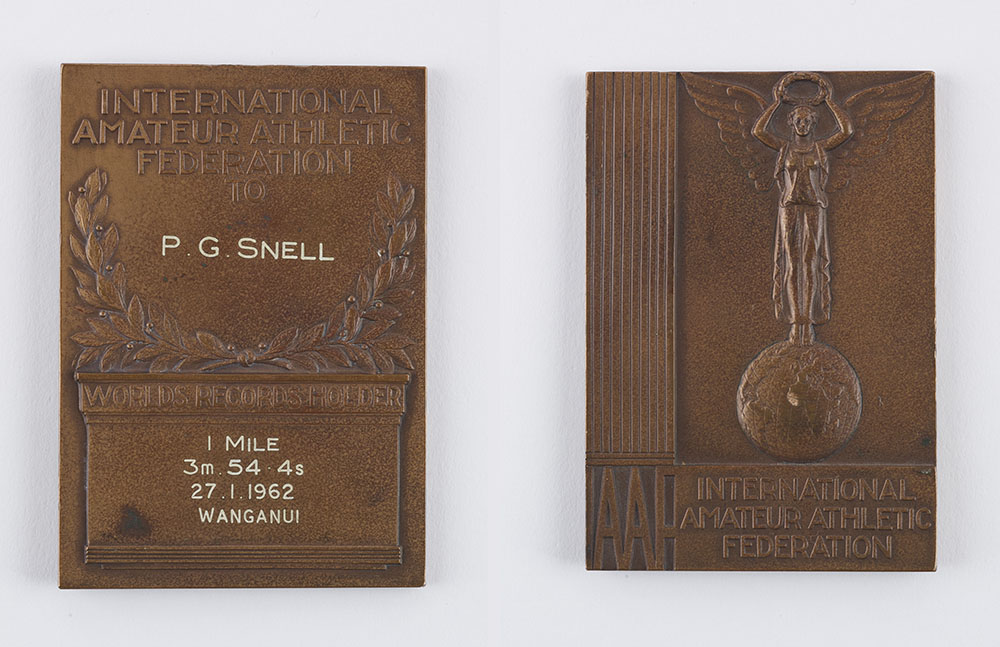 This International Amateur Athletic Federation World Record plaque was awarded to Peter Snell for his record winning mile in Whanganui on 27 January 1962. His time was 3 minutes and 54.4 seconds, setting both a new world record and the first sub-four minute mile on New Zealand soil.

The award features classical imagery of Nike, the Greek goddess of victory, and laurel leaves. Laurel has long been a symbol of victory and achievement. 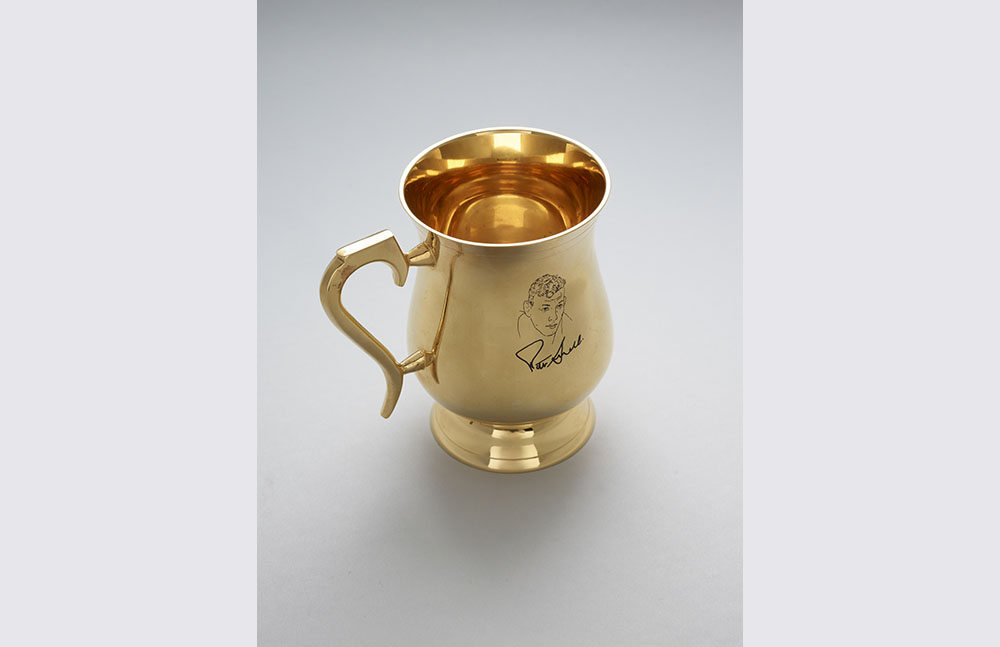 This tankard was given to Peter Snell to commemorate when he broke the world record for the mile in Whanganui on 27 January 1962. 15,000 excited spectators sang 'For he's a jolly good fellow'. His likeness and signature have been engraved into the tankard. 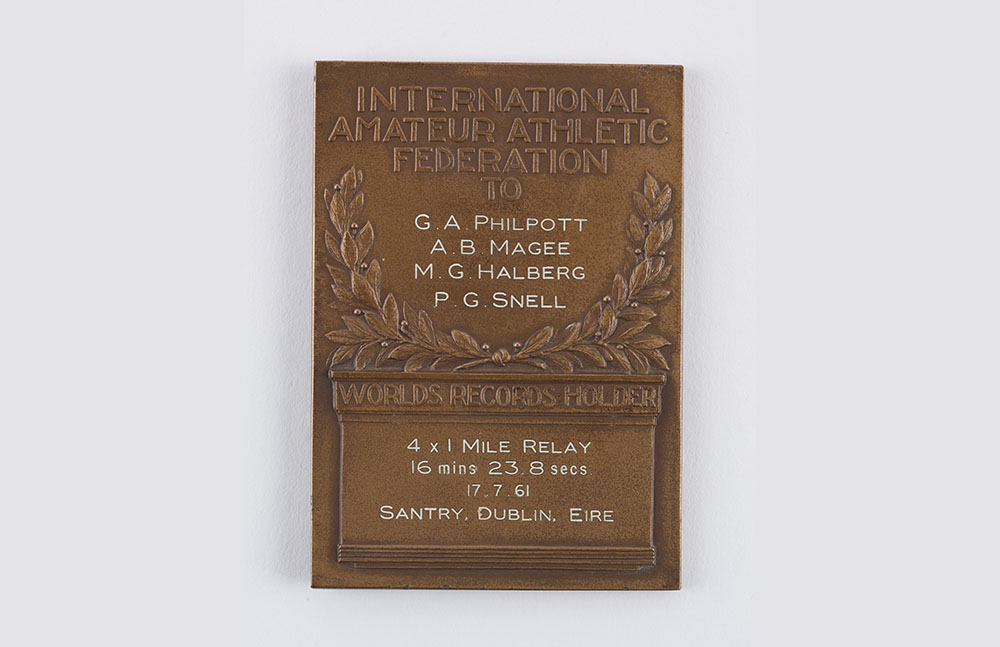 This World Record plaque was awarded to Peter Snell for his part in winning the 4 x 1 mile relay held in Dublin on 17 July 1961. The relay was a team effort by Snell, Murray Halberg, Barry Magee and Gary Philpott. Snell regards this shared victory as one of the highlights of his athletic career. 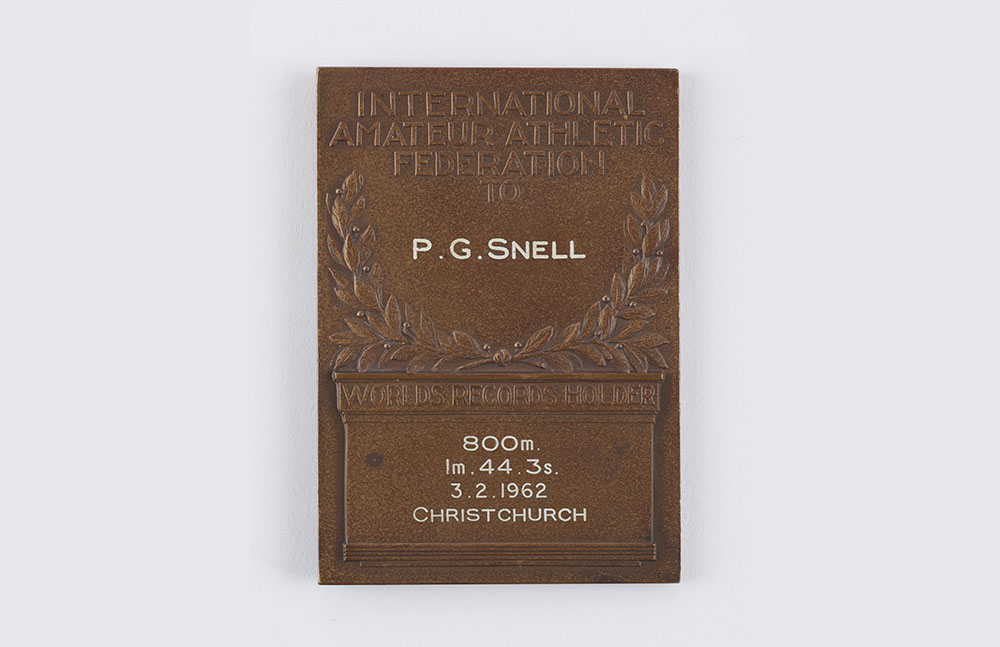 This World Record plaque was awarded to Peter Snell for his record winning 800m in Christchurch on 3 February 1962. His time was 1 minute and 44.3 seconds, which is still a New Zealand record. 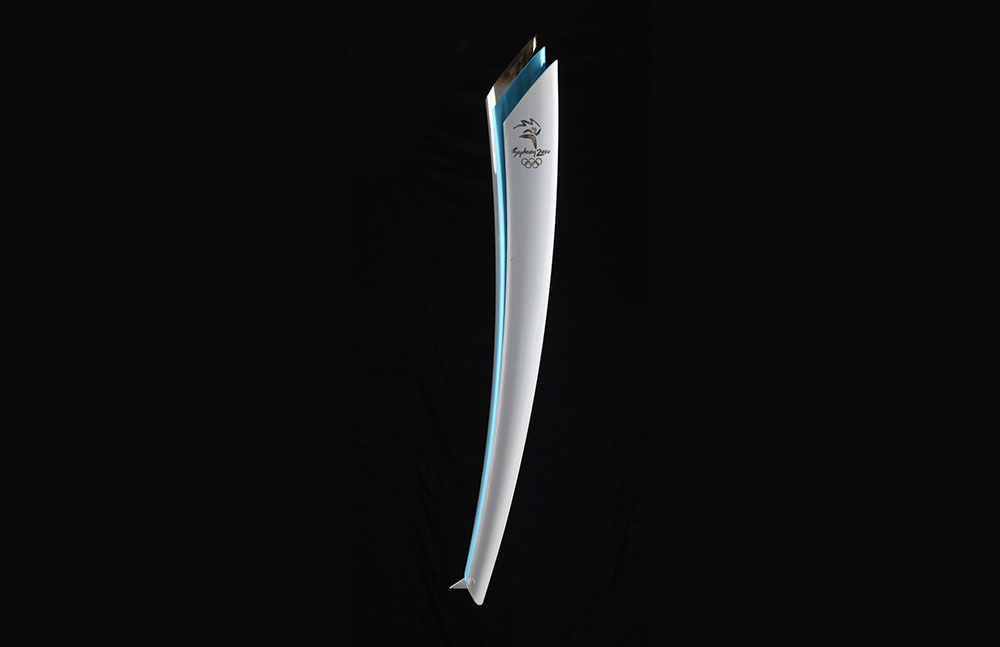 This Olympic torch was carried by Peter Snell on the first leg of the Olympic flame's journey around New Zealand before heading to Australia in preparation for the Sydney Summer Olympic Games in 2000. The award-winning design features a tiered rim to emulate the sail-like roofline of the Sydney Opera House. The white shell was intended to capture the feel and appearance of the Opera House roof tiles. The curving body reflects the shape of a boomerang, and the turquoise blue symbolises the waters of Sydney Harbour. 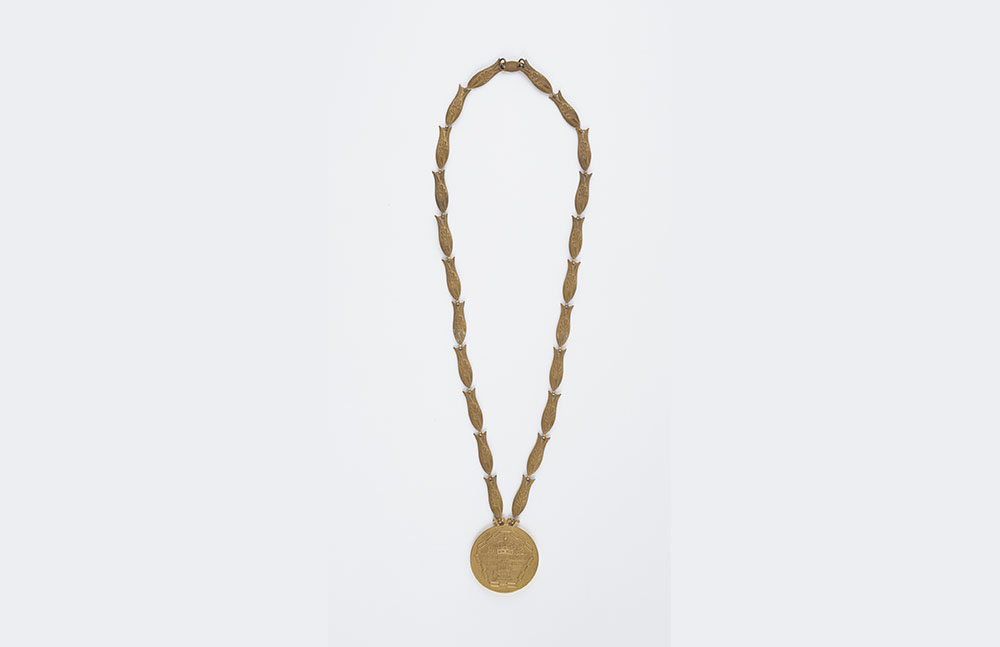 Peter Snell won gold medals in the 880 yard race and one mile race at the British Empire and Commonwealth Games in Perth, Western Australia, in 1962. This medal features a laurel leaf chain, inspired by the Rome Olympic medals two years earlier.

Order of the British Empire (OBE) 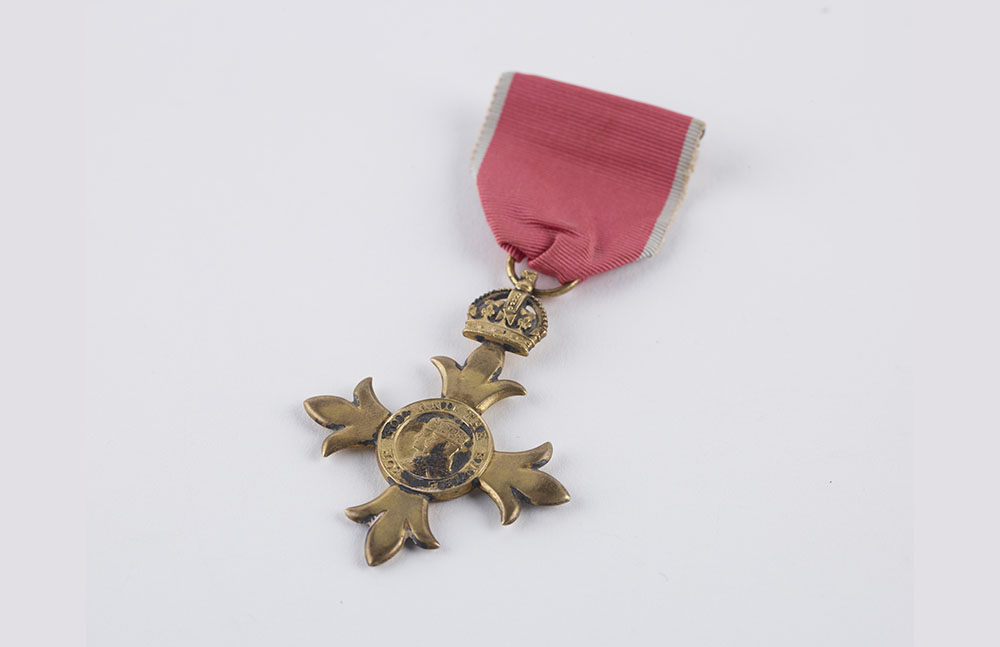 This Order of the British Empire (OBE) was awarded to Peter Snell in Auckland in 1965 for his achievements at the Tokyo Olympic Games in 1964. In 2002, he was made a Distinguished Companion of the New Zealand Order of Merit for services to sport, becoming Sir Peter in 2009.