Gifted to Northland chief Pūmuka by James Busby in 1834, Pūmuka’s flag was present at the signing of the Treaty of Waitangi, and is a national treasure. Find out more about this important taonga and the conservation process to allow it to be displayed safely. 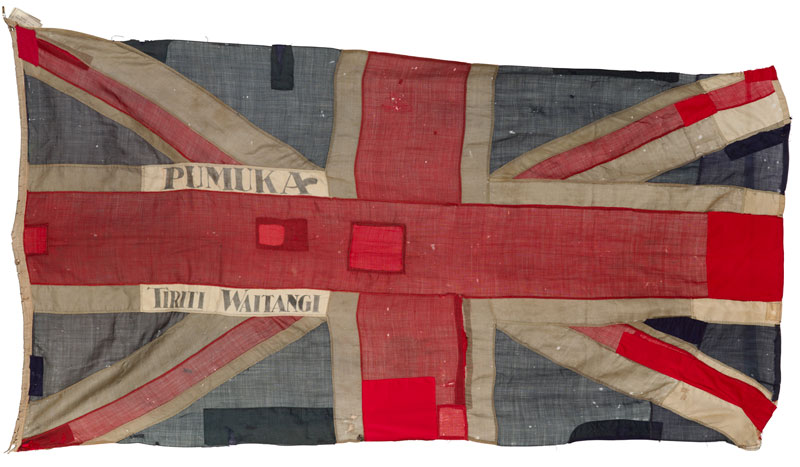 Pūmuka helped Busby to establish relationships with leading Northland chiefs following his appointment to NZ as the official British Resident, and Busby gave him the Union flag as an acknowledgment of his assistance.

Pūmuka had been involved in selecting an official flag for Aotearoa New Zealand in 1834. In 1835, he signed the Declaration of Independence, which asserted the country’s independent status but asked for British protection.

Pūmuka was the 6th signatory to the Treaty of Waitangi and encouraged Northland chiefs to follow suit. But he soon became disillusioned with the government’s failure to honour its Treaty promises.

In 1845, he joined Ngāpuhi leader Hōne Heke in the battle of Kororāreka. Pūmuka was the first Māori chief of distinction to be killed in this war between Māori and the Crown. He died in dramatic combat with a British Commander.

His flag was passed down through several generations of the Pūmuka family who used it for special occasions before it was gifted to the museum in 1960.

Pūmuka’s Flag: The mending of many hands

Behind the Scenes: Caring for Pūmuka’s flag