Before the arrival of metal tools and the gun, Māori used natural resources to make tools for hunting, fishing, eeling, and cultivating crops.

Homage was paid to the various gods and goddesses before, during, and after making tools, and during the food-gathering processes. Māori also adhered strongly to the maramataka

maramatakaMāori seasonal calendarMāori | Noun Māori, which they used as a guide for times to fish, go eeling, hunt, and plant.

The outer skin of rimurapa (bull kelp) is airtight. Air is trapped in the honeycomb-like structure inside each blade. Food preserved inside a pōhā can be kept safely for up to two or three years.

Traditional pōhā (bull kelp bags) are still used today by South Island Māori to preserve many types of food, and to transport preserved food from one area to another.

Each year, the Ngāi Tahu iwi of the South Island harvest tītī

To prepare and store the tītī, Ngāi Tahu:

The finished pōhā has a distinctive shape designed to be easily thrown and caught – there are no beaches on which to land supplies on the Tītī Islands. Pōhā are often made to hold up to 110 birds, although the average size holds 40 to 50.

Pōhā is an ancient Polynesian word that is still used throughout the Pacific. In Tonga, the word ‘puha’ means a container, carton, box, or other means of storage. In Te Wai Pounamu (New Zealand’s South Island), this word gradually became pōhā.

kioreMāori rat, Mus exulansMāori | Noun (Māori rat or Mus exulans) by the setting of paepae kiore (rat snares). The snares are made from mānuka bark, aka pirita (supplejack), and muka (flax fibre). They were baited with kūmara (sweet potato) and set on a kiore track. When a kiore entered the opening of the paepae kiore to eat the bait, its head would be caught in a snare that tightened around its neck, and its foot would trigger a spring that jerked its head up and strangled it.

When many kiore had been caught, they were skinned, cooked, and preserved in their own fat in taha huahua (gourds) until needed. The kiore were usually in good condition for catching and eating during late autumn and winter, and were a high-protein delicacy.

Kererū and tūī were often snared after feeding on the berries of the maire, uwha, houhou, miro, and mako trees. They would become thirsty and head for the nearest water, where a waka kererū, wai tuhi, or wai taeke (various kinds of pigeon snares) was waiting.

Waka kererū were made out of blocks of wood, usually tōtara, which were carved out. A pair of mānuka sticks was placed at each end of the wood blocks, and harakeke (flax) snares suspended between the sticks. The snares were then placed in the trees, ready for thirsty kererū. A kererū would go to the waka kererū to drink, place its head through one of the flax loops, and, as it lowered its head, the noose would tighten, ensnaring the bird. Kererū would then be cooked and preserved in their own fat in taha huahua (gourds).

During snaring season, fowlers would go out at dawn, check the snares, remove any captured birds, and reset the snares again. If kererū were plentiful, this would be done twice a day. 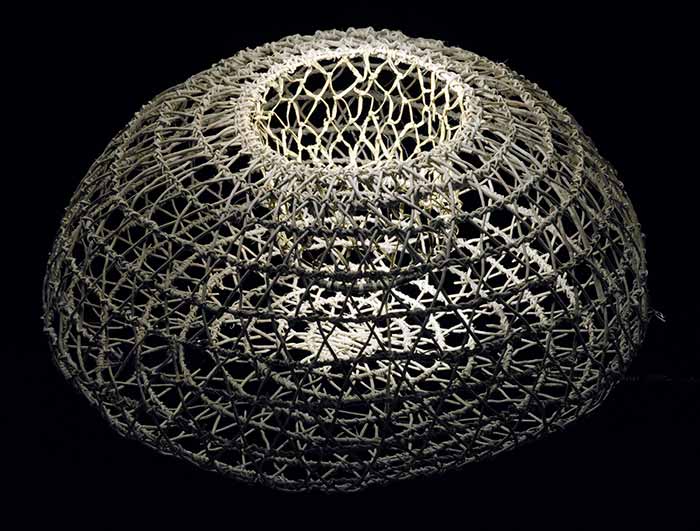 John was a teenager during the Depression (1929–39). As they had so little money, John’s parents and extended family used traditional Māori ways of gathering food. John says tāruke were used to catch many varieties of seafood besides crayfish, such as conga eels and fish.

This tāruke is made from the pakiaka (aerial root) of the kiekie, which is found growing in trees in the bush, and aka pirita (supplejack). Once John had enough pakiaka, they were boiled in an oil drum for an hour to loosen their thick bark. The bark was then easily removed by being pulled through a forked stick. The pakiaka were mostly used for the bindings of the tāruke and needed to be kept in water to stay flexible. However, the aka pirita was kept dry.