For nearly 800 years the indigenous group known today as Moriori have lived, sustained and developed their distinctive culture on a group of islands in the South Pacific collectively known among its Moriori inhabitants as Rēkohu, meaning misty sun.

Since the early 19th century, the peaceful inhabitants of these isolated islands have been subjected to some of the most extreme forms of oppression and enslavement. Additionally, the illicit collection and trade of kōimi tchakat kōimi tchakathuman remainsMoriori | Noun saw the remains of hundreds of Moriori karāpuna karāpunaancestorsMoriori | Noun stolen from sacred burial sites and held in collections, both abroad and within Aotearoa New Zealand.

Like many indigenous groups around the world, the sacred sites of Moriori were pillaged of kōimi tchakat and miheke mihekesacred artefactsMoriori | Noun only to be sold and exchanged as objects of curiosity and scientific specimens. In spite of the pain inflicted on generations of Moriori, even in the face of extinction, they held true to their most sacred principles, honouring a covenant of peace made by their ancestors and preserving it for generations to come.

From the time of its establishment in 2003, the Karanga Aotearoa Repatriation Programme has worked with Hokotehi Moriori Trust to negotiate for the repatriation of kōimi tchakat, and in this period of time, the remains of over two hundred individual karāpuna have been reclaimed from institutions and collections in Europe, the United Kingdom, North America, and Australia.

The ancestors of the Moriori and the settlement of Rēkohu

According to Moriori tradition, Rēkohu was discovered by two brothers, Rongomaiwhenua and Rongomaitere, arriving at Rēkohu directly from Eastern Polynesia. The brother’s first act on the newly discovered land was to establish their waina pono, or to stake their claim as first human settlers by establishing altars to their etchu etchugodsMoriori | noun and placing sacred pou

poupostsMoriori | Noun to mark the land for their people.

The first of these pou were placed in the henu henulandMoriori | Noun just north of the opening of the lagoon near Te Awapatiki and is named Ko Ro Puke o Heauoro, one of the most sacred places on the main island for Moriori both then and now.

Rongomaiwhenua remained on Rēkohu while Rongomaitere is believed to have departed the island and sailed on to a place called Aote, thought to be a reference to Aotearoa, establishing the course for later waka to follow. Subsequent migrations from Eastern Polynesia followed the migration of these brothers to the South Pacific.

wakaocean-going vesselMāori | Noun o bring another wave of settlers were Rangimata and Rangihoua, with the waka Ōrupuke arriving a generation later. 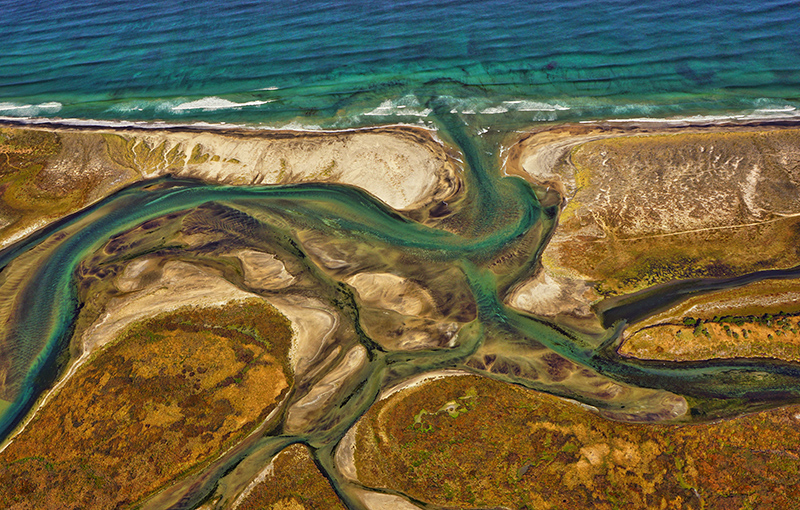 Te Awapatiki serves as the entrance to Te Whanga lagoon and is one of the most culturally and spiritually significant places for Moriori. Photo by and courtesy of Robbie Lanauze (Instagram @robbielanauze)

The sacred covenant and a promise for peace

After the arrival of the waka Ōrupuke, violence and conflict among the island's inhabitants increased, de-stabilising life and peace on the islands. This dramatically changed when the legendary tohuk’ tohuk’spiritual elderMoriori | Noun Nunuku Whenua, dismayed by the senseless bloodshed intervened. In the midst of a clash between the Rauru and Wheteina tribes, he ordered an end to warfare and killing among all of the tribes of Rēkohu and Rangihaute (meaning ‘misty skies’ and also known as Pitt Island).

The people were to relinquish their weapons by placing them onto the altars and enter into a sacred pact with their gods, affirming that the power over life and death was to be taken from the hands of people and given back to the authority of the gods. The tohinga tohingacovenant ritualMoriori | Noun would be preserved and renewed through the generations and handed down from father to son.

The weapons which had been placed on the altar were removed and handed to the child. An explanation was then given about the old weapons, what they represent, and the significance of the covenant. To conclude the tohinga the weapons would be returned to the altar by the child renewing the pact and the promise made by their ancestors.

Understanding the need for an alternative to warfare, Nunuku went further by providing a means for resolving conflict when he declared that they may continue to fight ‘with wooden staffs the thickness of my two thumbs but upon first blood being drawn fighting must cease’. This form of ritualised conflict is known among the Moriori as Nunuku’s Law, and became a custom for the descendants of Rongomaiwhenua.

In 1791, the Moriori way of life changed with the arrival of the British Royal Navy brig HMS Chatham, captained by Lt. William Broughton. The HMS Chatham was part of the Vancouver Expedition and landed at Kaingaroa Harbour after being blown off course. Broughton made observations of the Moriori he encountered with notes on house structures, fishing nets, boats and technology. One of his men, desirous of acquiring one of the fine fishing nets shot and killed a Moriori – Tamakaroro.

Not long after Broughton’s visit, around 1806, the island became known as a rich sealing and whaling ground, which resulted in the collapse of the seal populations vital to Moriori as a source of food and clothing. It was only after this encounter that the first peoples of Rēkohu and the surrounding islands were identified as Moriori.

Prelude to genocide and oppression

In 1835, two Māori tribes, Ngāti Mutunga and Ngāti Tama arrived from Wellington on the ship Lord Rodney. They were welcomed and cared for by Moriori in accordance with tikane Moriori, tikane Moriori,Moriori customMoriori | Noun but by early the following year their intentions to violently seize control of the Islands from Moriori became clear.

In early 1836, Moriori gathered at Te Awapātiki and debated over three days how they would respond to the existential threat that they were being confronted with. Although young Moriori wanted to resist the invasion through violent means, the elders forbade breaking with their sacred covenant and ancient tradition of peace.

Moriori leaders, Torea and Tapata urged the gathering at Te Awapātiki to hold fast to the teachings of Nunuku. Like their ancestors, Torea and Tapata were reaffirming and renewing Nunuku's Law to not kill. To break with it would have been a betrayal of their gods, of their ancestor’s wisdom, and a complete loss of mana for them and generations to come. Rather than diverge from the traditions that have passed through generations of Moriori.

When they returned to their homes they were immediately attacked and many perished. For those that survived, they would face decades of enslavement, oppression, and genocide.

In 1862, Moriori lodged their first claim with the British colonial government in New Zealand with a petition to Governor George Grey seeking emancipation from slavery and the return of their lands. From the time of the initial arrival of Ngāti Mutunga and Ngāti Tama in 1835 through to 1862, Moriori recorded that 1,561 of their people had been killed or died, out of a population of at least 2,500. The names of the Moriori that perished during this period are marked in the sacred meeting house, Hokomenetai, the central house of Kōpinga Marae.

The fascination with the classification of human societies, according to physical appearance, led to a raft of problematic theories such as phrenology, craniometry and ‘Social Darwinism’. The latter theory developed as a construct in the late-19th century that enabled the further collection of human remains, and is based on the idea that people are subject to an evolutionary hierarchy.

These theories led to the collection and trade of large numbers of human remains from Rēkohu, especially in the late 1800s, at a time when Moriori had suffered the trauma of invasion, genocide and enslavement that contributed to their collapse in population. Much of the collecting on the islands took place because Moriori were not there in sufficient numbers to oppose it, nor were there any laws in place to prevent this destructive practice.

Moriori funerary practices were varied but crouched sand-dune burials were the most common. European observers noted large amounts of exposed remains over most of the coastal parts of the islands, making their removal very easy.

The many collectors were self-styled ethnologists, museum officials and island residents keen to sell Moriori remains and miheke miheketreasured objectsMoriori | Noun. For example, Henry Hammersley, who first visited the island in 1863, and Edward Tregear in 1889 each removed kōimi tchakat. Local residents like Alexander Shand and Edward Chudleigh openly traded and sold kōimi and miheke, as did Colonial Museum officials from New Zealand.

Although both Māori and Moriori remains were both illicitly collected and traded, kōimi tchakat represent by far the largest group of ancestral remains removed from their burial places in the South Pacific.

In 2019 the Ngakahu National Repatriation Partnership was established by Te Manatū Taonga Ministry for Culture and Heritage to support domestic institutions, museums, galleries, and iwi in returning ancestral remains to source communities.

Working in tandem with both the Ngākahu National Repatriation Partnership and the New Zealand Repatriation Research Network, plans to undertake a consolidated return of all kōimi tchakat to Rēkohu from Aotearoa are well underway, and the Hokotehi Moriori Trust are working with their community toward developing a sacred repository to receive their karāpuna upon their arrival home to Rēkohu. 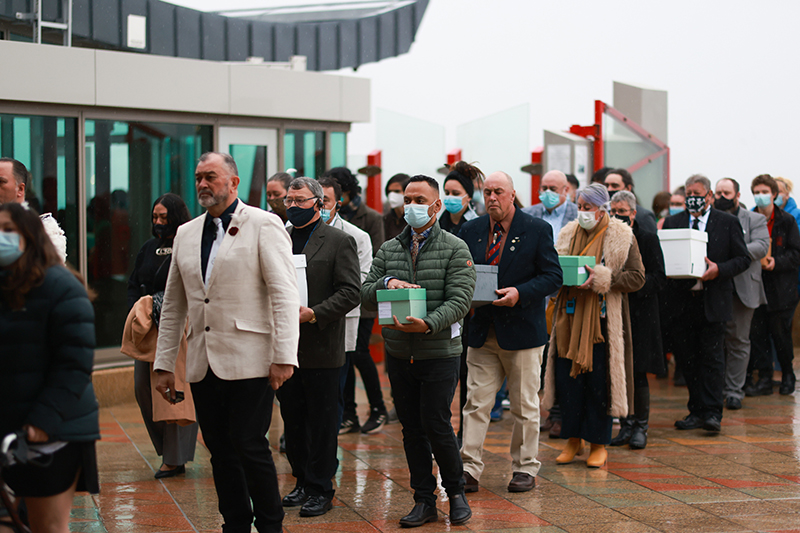