Crafting Aotearoa: A Cultural History of Making in New Zealand and the Wider Moana Oceania

A landmark publication that takes another look at craft and its broader cultural role. 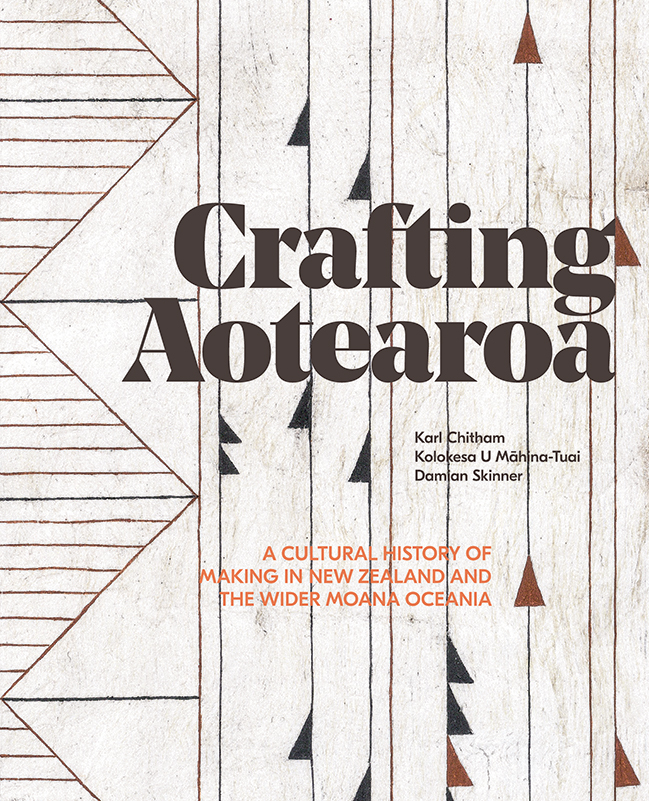 A major new history of craft that spans three centuries of making and thinking in Aotearoa New Zealand and the wider Moana (Pacific). Paying attention to Pākehā, Māori, and island nations of the wider Moana, and old and new migrant makers and their works, this book is a history of craft understood as an idea that shifts and changes over time. At the heart of this book lie the relationships between Pākehā, Māori and wider Moana artistic practices that, at different times and for different reasons, have been described by the term craft. It tells the previously untold story of craft in Aotearoa New Zealand, so that the connections, as well as the differences and tensions, can be identified and explored. This book proposes a new idea of craft – one that acknowledges Pākehā, Māori and wider Moana histories of making, as well as diverse community perspectives towards objects and their uses and meanings.

Crafting Aotearoa in New Zealand Geographic. “Crafting Aotearoa is ambitious, to say the least. Across 460-plus pages it surveys three centuries of craft in New Zealand and the broader Pacific, examining its role in defining cultural identity, and the tensions and transformations that occur as it engages with outside knowledge and practices … a delight to dip into. For a significant work, it carries its load lightly”

Crafting Aotearoa in Urbis “ … first and foremost an acknowledgement of history as it should be acknowledged: a kind of retelling that is resolved to start a ‘dynamic conversation’ between Māori, Pākehā and wider Moana Oceania (Pacific) craftspeople and their work … it’s a wellspring of knowledge on what has constituted three centuries of making in New Zealand.”

Honourable mention in art critic Paul Wood's picks for the best art books of 2019 “An indispensable, encyclopaedic and comprehensive reference to three centuries of craft in New Zealand, Crafting Aotearoa manages the difficult task of marshalling the contentious categories of craft, art, folk art, design and indigenous practices in a way that will surely set the standard for future scholarship … Although there have been sporadic books on craft in Aotearoa before, this is the first of its scope, and for a reference work it is surprisingly readable and not at all bogged down in its scholarship or the ever-volatile politics of craft.”

Crafting Aotearoa on NZ Booklovers website “Crafting Aotearoa is broad in its reach, visually rich and includes a wealth of historical images as well as new photography … The cover begs you to pick the book up, to stroke it, to lift the cover and discover what other treasures lie within … It is clear that everyone involved in the creation of it over the years cares deeply about craft, about inclusion, and about our shared artistic history. A stunning book about the important cultural history of making in Aotearoa and the wider Moana.”

Kolokesa U Māhina-Tuai has a background in art history, social anthropology and museum and heritage studies and was curator of Moana Oceania cultures at the Museum of New Zealand Te Papa Tongarewa from 2004 to 2008 and Auckland War Memorial Museum Tāmaki Paenga Hira from 2013 to 2017. She has been a guest curator and consultant for Auckland Art Gallery Toi o Tāmaki, and a consultant for Alt Group and the Government of Tonga’s Culture Division, Ministry of Tourism. She is co-author of Nimamea`a: The fine arts of Tongan embroidery and crochet (Objectspace 2011), Tangata o le Moana: New Zealand and the people of the Pacific (Te Papa Press, 2012) and Kolose: The Art of Tuvalu Crochet (Māngere Arts Centre – Ngā Tohu o Uenuku, 2014). With Toluma`anave Barbara Makuati-Afitu, she is the co-founder of the consultancy Lagi-Maama, which works with the Rei Foundation, Melbourne Museum and The Arts Foundation.

Karl Chitham (Ngā Puhi) is Director of the Dowse Art Museum and was formerly the Director and Curator of Tauranga Art Gallery. He has been involved in the arts in Aotearoa in a variety of roles for over fifteen years. Karl has had a long association with craft practice, holding a Bachelor of Visual Arts in Jewellery, as well as being a curator and a commentator. His projects have included a series of exhibitions and accompanying publications highlighting contemporary toi Māori such as Whatu Manawa: Celebrating the weaving of Matekino Lawless, Toi Mauri: Contemporary Māori art by Todd Couper and Whenua Hou: New Māori ceramics.

Damian Skinner is a Pākehā art historian and curator who lives in Gisborne. He received his PhD in art history from Victoria University of Wellington in 2006, for a thesis exploring the dynamic relationship between customary and modern Māori art in the twentieth century. This was later published as The Carver and the Artist: Māori art in the twentieth century (Auckland University Press, 2008). He was a Newton International Fellow at the Museum of Archaeology and Anthropology, University of Cambridge in 2012–13, and curator of Applied Art and Design at the Auckland War Memorial Museum Tāmaki Paenga Hira in 2014–15. He has written a number of books about Māori and Pākehā art, and Pākehā craft. His most recent book is Theo Schoon: A biography (Massey University Press, 2018).