Get the facts about Matariki – a star cluster known worldwide and treasured in Aotearoa New Zealand. 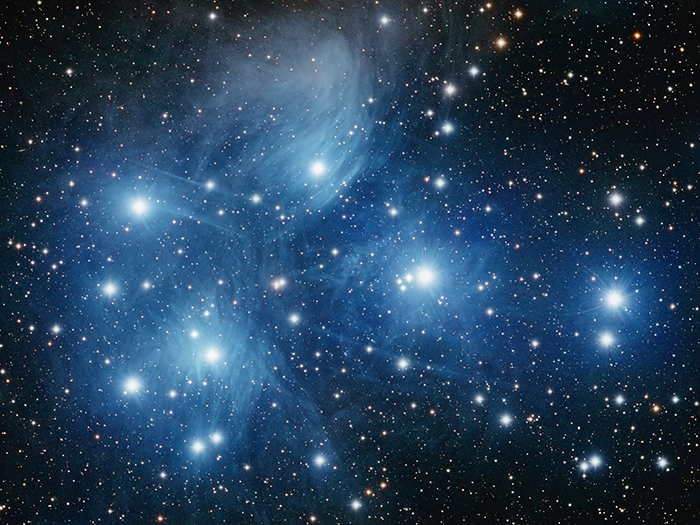 The Matariki star cluster. The two meanings of Matariki both refer to stars: mata ariki (eyes of god) and mata riki (little eyes).

1. The reappearance of the Matariki stars signals the beginning of the Māori New Year.

However, not all iwi

iwitribesMāori | Noun celebrate at the same time. Some may begin festivities on the first full moon after the star cluster rises, or on the next new moon.

2. Matariki is a star cluster, not a constellation.

A cluster is a group of stars that are near each other in space. When seen from Earth, the stars in a constellation appear to be close together in a pattern, but they might actually be far from each other. There are about 500 stars in the Matariki cluster, but only six or seven are visible without a telescope.

Meet the nine stars of Matariki

The Matariki star cluster – are there seven or nine stars?

3. You can see Matariki for yourself.

The location of Puanga and Matariki in the mid-winter sky. From Work of the Gods by Richard Hall

From early June, before sunrise, look to the north-east horizon. Find the constellation Tautoru

TautoruOrion's beltMāori | Name, or Orion’s belt (sometimes called ‘the pot’). Trace a line northwards from the three stars of Tautoru. Look for a faint sparkle of tiny dots, about the same width as Tautoru is long. This is the Matariki star cluster. Matariki can also be seen during the summer months in this location of the sky after sunset.

Watch a video on how to find Matariki

4. Matariki is one of the star clusters nearest to Earth.

Compared with other star clusters, Matariki is close to Earth – but it’s still 440 light years away. If you drove there in a car at a speed of 100 kilometres an hour, you would arrive in 4.8 billion years!

5. Matariki has many different names around the world.

The star cluster is visible to the naked eye from most parts of our planet, and has many different names. In English, it is called the Pleiades (its ancient Greek name) or the Seven Sisters. The Hawaiian name is Makali‘i, or ‘eyes of royalty’, and in Japan it is Subaru, meaning ‘gathered together’.

6. Some iwi use Puanga (Rigel in the constellation Orion) as a signal for the new year.

Matariki’s reappearance in the north-east sky is not visible in all parts of New Zealand, especially in areas to the west of mountains. For some iwi in Taranaki and Whanganui, and on the West Coast of the South Island, the new year begins with the rising of Puanga.

Learn about the difference between Matariki and Puanga

tohungapriests or expertsMāori | Noun looked to Matariki to predict if the next harvest would be abundant.

The brighter and clearer the stars seemed, the warmer the growing season would be, ensuring a good harvest.

8. Many iwi speak of the Matariki stars as a mother and her daughters.

The mother is Matariki, and her daughters are Tupu-ā-nuku

Tupu-ā-nukustar associated with everything that grows within the soil to be harvested or gathered for foodMāori | Name, Tupu-ā-rangi

Tupu-ā-rangiAtlas – one of the stars in Te Kāhui o Matariki, the Pleiades star clusterMāori | Name, Waipunarangi

Waitīstar associated with all fresh water bodies and the food sources that are sustained by those watersMāori | Name, Waitā

9. For some iwi, Matariki is connected to the creation story of Ranginui and Papatūānuku.

One Matariki story is about when Tāwhirimātea

Tāwhirimāteagod of the windMāori | Name discovered that his parents Ranginui

PapatūānukuEarth motherMāori | Name had been separated. He tore out his eyes in anger and threw them into the sky – the stars are his seven eyes.

10. Matariki was used by the crews of voyaging waka

wakacanoeMāori | Noun to guide them across the Pacific.

Tohunga kōkōrangiTohunga kōkōrangi expert astronomers used stars and star clusters such as Matariki to help them navigate great distances across the Pacific. Today, there is a revival of these traditional navigation skills. Crews have sailed double-hulled waka from as far as Rarotonga to Aotearoa New Zealand, guided only by traditional methods.